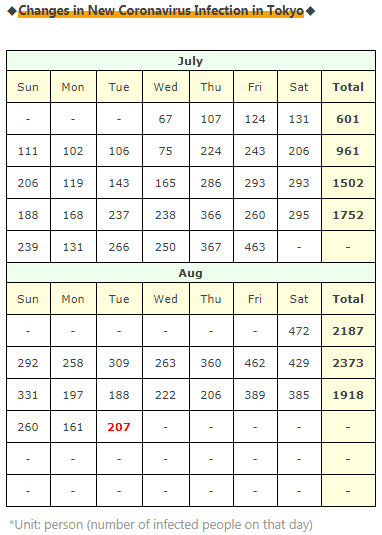 207 (+46 from the day before) new infections confirmed in Tokyo.

The number of new infections in Tokyo increased a little compared with yesterday's Monday, but the number of 207 people is a subtle number that can not be said to be large or small...

What will happen from Thursday when the number of infected people increases the most in a week? ..

・Infection in the facility [1] people

→Men and women from Australia [3] people

→Male nurse in his 30s working at the Prefectural Psychiatric Center

* He have a family who was confirmed infection living together, so he was stand by at home

*Her family living together is confirmed infection

*Probably these two are acquaintances of the infected person

Today's topic isn't suddenly Tokyo, but today we're talking about Okinawa, where the number of infected people was as low as 33...

The health superintendent, who is unaware of the low number of new infections on the 17th and 18th for the second consecutive day, said,

"I think the emergency declaration is effective."

Since it's Sunday and Monday, I feel like I can't say anything yet, but I hope it really works!

And 10 nurses from 5 prefectures such as Tottori and Fukui will be dispatched to support the lack of nurses!

Not only the "Go To Travel Campaign", there are a lot of topics related to infected people that are not announced at accommodation facilities and buildings of general companies.

If the reason is (of not announced) that disinfection costs or prevent to bad rumors, I'm really angry.

There are many people who tell them that the next day when a positive result was confirmed, ``I went there yesterday,'' so it is difficult to judge...

It's hard to judge, and at the same time,

if I'm working in a building there...

And today there is another interesting news.

According to the research team of the National Institute of Infectious Diseases,

the spread of infection from March was

in the spread of infection after June

It is said that it belongs to this new type even now.

In short, the infection is spreading from Tokyo to rural areas.

People who come to Tokyo for business trips

It's taken by people who go on business trips from Tokyo

People who come to Tokyo for business trips

It's taken by people who go on business trips from Tokyo

And in connection with that, I tried to recompile the data that showed how many people moved in Obon Season!

This article is not so long, so if you are interested, please read it!

I've already said it on Twitter and this summary article over and over again,

Last week, the number of infected people was small throughout the week, but it was the Obon + consecutive holidays season.

This week will be an "ordinary weekday" when the effects of Obon and consecutive holidays will disappear, so if you do not increase here, it may be a sign that COVID-19 decrease in full swing.