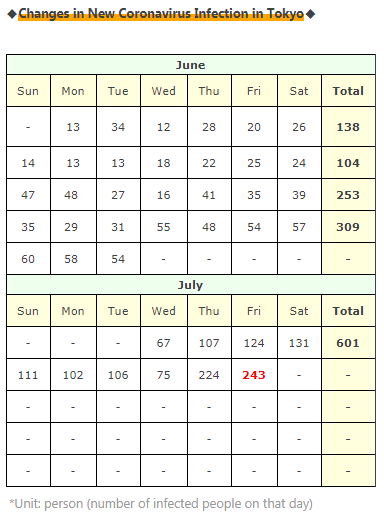 243 (+19 from the day before) new infections confirmed in Tokyo.

The number of new infections in Tokyo was over 200 today, too

(as I expected...), and It was confirmed that over 200 yesterday were not accidental...

It has become a reality that almost everyone except the government of Japan and Tokyo was worried and afraid...

Well, it's no use crying, so I will summarize

in the stage performances held

→ Although infections of nurses have been confirmed, no large-scale outbreaks have been reported. Most seem to be small or individual infections.

※Other [18] people are not disclosed

= No colleague or patient infected at work

= It is said that there is no contact with the patient, but the policy is to inspect seven colleagues

→Although the prefecture's leave request standard has been exceeded, the medical environment is not so tight. So the government of Saitama prefecture said "We do not have any plans to request leave at this time."

Today I would like to add a comment from Dr. Satoshi Kutsuna of the National Center for Global Health and Medicine, which will play a central role in the treatment of COVID-19.

"In areas where many infections have been confirmed in Tokyo, it seems that the situation is such that it may be possible to get infections anytime and anywhere. In the medical field, the number of patients has been visibly increasing since last week.

At present, there are many people with mild illness, but there are some people who become severe after one to two weeks, so it is not possible to feel relieved.”

"With the spread of community-based infections, there will be some unaware infected people who are hospitalized for diseases and injuries other than COVID-19. I am worried that such patients will spread the infection in the hospital without realizing it and cause clusters. Especially in Tokyo, it may be necessary to establish a system that can take appropriate measures for infected people by conducting tests as soon as possible for inpatients."

And today, in Japan

"The event relaxed as scheduled,"

It has become possible to accommodate 5,000 people from no audience...

It is unclear whether Tokyo is "to give priority to the economy" or "to acquire the group immunity",

but it seems that some increase in the number of infected people has already been assumed.

However, it's best not to get infected because of a horrible disease that hasn't even been vaccinated against it.