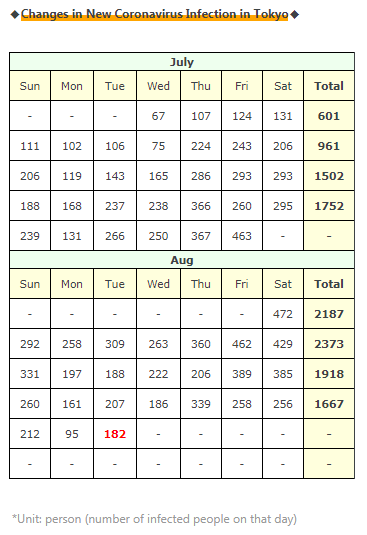 I expected that the number of new infections in Tokyo will increase to some extent because yesterday Monday (95 people) was too small, but it is almost doubled...

・Infection in the facility [9] people

・As for "infection in facilities", there are many facilities for the elderly, and there are 5 or 6 infected persons respectively.

→Men and women from India and the Philippines [5] people

*Japanese women in their 40s living in Tokorozawa

*In Saitama prefecture, four outbreaks such as birthday parties and weddings seem to have occurred.

*Women in their 20s attending universities outside the prefecture

*Nursing assistant in her 50s

*There was some other infection information at the school.

・Request careful judgment from visitors from outside the prefecture→(August 13)

This inn is an accommodation subject to the "Go To Travel Campaign"...

It seems that the front staff and the staff in charge of cleaning were infected.

The people in the lodging industry have to do business so that they don't go bankrupt, and since it is side by side with the infection, it is really tough...

Also, related to "Go To~", in the "Go To Eat Campaign", the issuance of meal tickets has finally been decided to 35 groups such as JTB.

It seems to start from the area that is ready after September.

At the moment when I heard "33 prefectures", I thought "Oh, they removed the areas with a lot of infection," but it seems that Osaka and Aichi where have many infections are included, and the remaining 14 areas were not really just in time...

I think it would have been better if the infection subsided a little more...,

but I think the food and lodging business related to "Go To~" is already economically limited, so I have to decide to do it in order not to go bankrupt it. ..

It seems that the ordinance on mass infection was enacted for the first time in Japan.

The main contents are that,

①If a mass infection occurs, it is possible to order business suspension to stores that do not take the necessary measures.

②Cooperating money will be provided to shops that have been infected with despite taking appropriate measures.

The number of infected people in Tottori has increased a little.

I hope this completes the control...

There are about 400 people decrease today!

On the other hand,

The infection has spread again in South Korea, with 280 people being confirmed to be infected each day, and it seems that the school will continue to teach online until September 11th.

It seems that from July 22nd of last month, medical personnel and quarantine personnel have already been given the exception of COCID-19 vaccine (the final clinical trial in China).

"Completely controled" is still far off in the world...

It seems that the government will consider whether it is appropriate that COVID-19 is a "designated infectious disease" (which can force hospitalization)...

It is pointed out that if it is a "designated infectious disease", it is necessary for the national government to identify all infected persons, which will increase the burden on the public health center. ..

No, you don't have to think about that for the time being, so please take proper measures first and let it control ! !! !! (Angry)

…I want to say that.