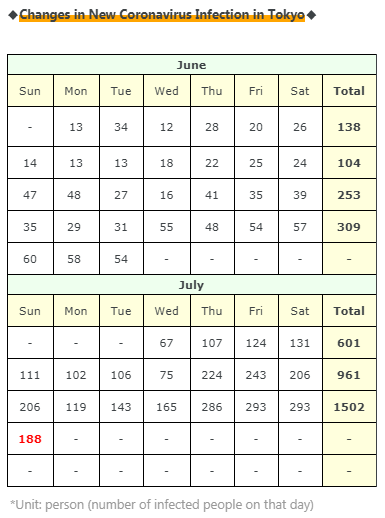 The number of new infections in Tokyo has dropped considerably!

However, the number of infected people since the beginning of July is like a roller coaster condition that is extremely turbulent,

so I'm not so happy because I think "I may increase it again tomorrow."...

・Infection at a dinner with friends and acquaintances [13] people

・About the number of new infections today was less than 100 compared to yesterday, the person in charge of Tokyo said that there is a possibility that the number of reports from medical institutions etc. was low because it was a holiday.

→ Men and women in the Peruvian and Philippines [8] people

And today, the number of infected people remains high in prefectures other than Tokyo, including Osaka...

Nearly 100 people have been going on for days...

→There are duplicates of people who have been confirmed infected before.

→Working inside of office from the beginning of June

→No collection/transportation record before and after symptom detection

→ Female in her 40s, a kindergarten teacher in Yokohama [1] person

*Kindergarten will be closed from 20th for the time being

→Welfare facilities within the Hiratsuka Health and Welfare Office [2] people

*Female employees in their 50s, users in their 60s

*2 people are rich contacts of users

who have already been confirmed to be infected

*Dining at home with 4 relatives (with confirmed infection)

from outside the prefecture

*Classes of teachers with confirmed infection

*There are many people that 1st time of test was negative,

but the other day,

2nd time of test was positive when they had a fever and tested.

In prefectures other than the above, many prefectures, including Hyogo, Aichi, Kyoto, and Fukuoka, have new infections of 10 or more.

The really scared is that

This is summary of above, but

but if you look closely...

The number of new infections in Saitama, Chiba, and Kanagawa near Tokyo is decreasing today...

Then where did the other number of new infection people go? ..

The number of new infections in other prefectures nationwide is increasing....

It is spreading all over Japan...

In particular, I hope that the infection has not spread as it will ooze out from Tokyo prefectures to Tochigi 9 and Ibaraki 5 ...

On that point, Gunma is perfect. lol

The number of infected people is zero today!

As expected, Gunma is sometimes called a different world! 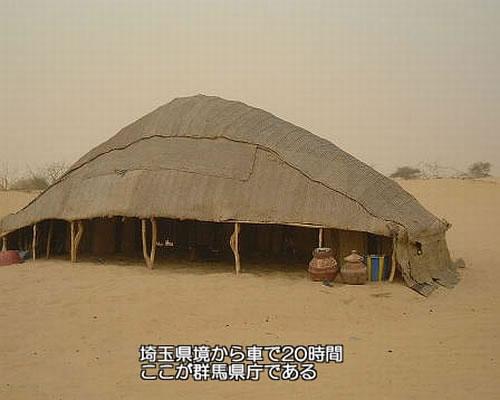 Not when we're joking...

Even though it has calmed down today, the number of new infections in Tokyo has been steadily increasing since July, but...

The "Go To Campaign" will start on Wednesday, July 22, this week, despite the spread of infection in Tokyo and neighboring prefectures, even across Japan.

It's a situation where I really only think it should be postponed. ..

The governors of most areas are also against the campaign.

However, there are some good news as countermeasures!

Mr. Nishimura, who is a hot topic every day, had decent news today.

From August 1st, the restrictions on holding events will be further relaxed, but he said decent thinking that he will listening carefully to the opinions of experts and making a careful judgment.

He also said that he would clarify and consider that the governors of 1 metropolitan area and 3 prefectures in the Tokyo metropolitan area were required to establish legislation so that they could take stronger steps to business operators who had insufficient infection prevention measures .

This is the first one.

the other one is…

Will it be exceeded tomorrow? ..

Thanks to the progress of the vaccine development I introduced earlier and the statement by Chief Cabinet Secretary Suga, I feel that we have made a slightly positive conclusion today!

There's a lot of good news,

and prevention is definitely effective