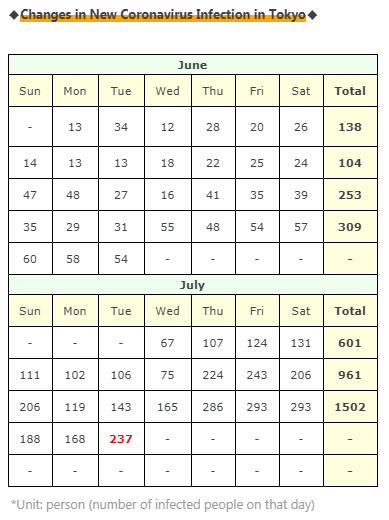 237 (+69 from the day before) new infections confirmed in Tokyo.

The umber of new infections in Tokyo has increased as expectd...

However, we have already experienced it several times that "the number of newly infected person is small for a few days before the big increase".

So I was afraid that there would be more than 300 people today because the number of people infected was small yesterday and the day before yesterday.

As a result, the number of infected people today was in the low 200s, so I was a little relieved.

There are still too many, though.

→Outbreak of a Philippine pub in Adachi Ward [21] people

→ They gathered privately in early July

*Inspected because the person who was there was infected.

→ The facility had nosocomial infection in 10 people

from April to May this year

→ Users and health care worker in their 50s and 80s

→ Men and women in the Philippines [15] people

*Infection from family living together.

→Among infected people, many commuters and visitors in Tokyo

*They are investigating rich contacts because he sees 70 people two days before the onset of symptoms.

“We have to recognize that the “second wave” has arrived."

In prefectures other than the above, many prefectures, including Kyoto, Hokkaido, Fukuoka(53), Hyogo and Gifu etc. have new infections of 10 or more.

Chief Cabinet Secretary Suga spoke at a press conference in the afternoon regarding the increase in the number of infected people in Tokyo.

“A certain infection has been confirmed mainly in Tokyo, but it includes the results of actively inspecting shops in the entertainment district at night such as clubs, and those under 39 years old account for 70 to 80%"

“The number of hospitalized patients is increasing, but the number of seriously injured people is 13, and it is not a situation where the medical care provision system is under pressure. "

In short, "It's still acceptable. "

That is how he seems to say.

Mr. Tatsuhiko Kodama, an emeritus professor at the Research Center for Advanced Science and Technology at the University of Tokyo, also mentioned in the Diet's answer,

If we do not take measures now, there is a possibility that the number of new infections in Tokyo will be 500 instead of 300 in a week, so I would like the government and Tokyo to take measures immediately...

And the start of "Go To (Travel) Campaign" is coming soon tomorrow.

There was news about "Go To Eat" related to it today.

It has finally exceeded 5,000 since yesterday...

However,
In conclusion, vaccine development = the fundamental solution to the world of COVID-19 will be coming soon, so let's be careful to prevent infection until then!