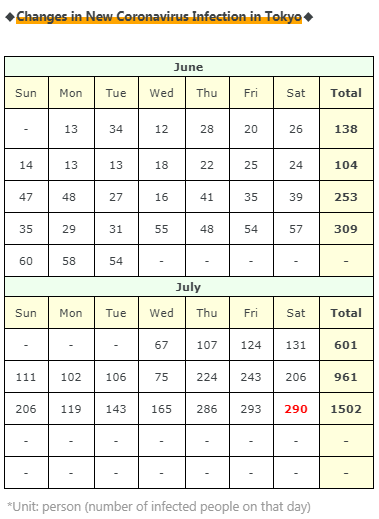 290 (-3 from the day before) new infections confirmed in Tokyo.

How many new people will be infected in Tokyo...?

The number of infected people does not stop increasing...

・In particular, the infections among women in their 20s are increasing.

There were [85] people from 9th to 10th July, but from July 16th to 17th, it will reach [133] people. Infected mainly in "the entertainment district at night" and dinners.

→ Men and women in the Indian and Philippines [8] people

And today, the number of infected people is getting worse in prefectures other than Tokyo, including Osaka.

Maybe it's because I live in Tokyo and I'm mainly summarizing this article about Tokyo,

but from Osaka, Saitama, Chiba, etc., I have a unpleasant feeling that the number is gradually increasing as it was before the infection is explosion in Tokyo.

I feel so much that it would be nice if I could stop here...

I would like to summarize some prefectures that have a large number of people infected, not just in the vicinity of Tokyo.

* Two men infected from family who is the audience.

who has confirmed infection [1] person

→Nurse at a hospital in Sagamihara city [1] person

*It seems that a cluster is occurring in Atami City, Shizuoka Prefecture.

*Elementary school is scheduled to be disinfected by Monday,

*One of them who is 80s patient was negative in the test of the other day, but was positive when she had a fever and tested.

In prefectures other than the above, many prefectures, including Hyogo, Aichi, Kyoto, and Hokkaido, have new infections of 10 or more.

And out of 47 prefectures nationwide, 31 are infected.

It is spreading all over Japan...

The "Go To Campaign" will start on July 22nd, but it really seems like we should postpone it...

Under the emergency declaration, the national character of being able to be calm is wonderful,

but if it is rifted and freed, the number of infected people will increase at a tremendous rate...

When I see the noisyness of young people at night in Shibuya and Shinjuku with my own eyes,

I understand why infection is spread...

I feel a little sad.

Mr. Nishimura, who is a hot topic every day, had decent news today.

From August 1st, the restrictions on holding events will be further relaxed, but he said decent thinking that he will listening carefully to the opinions of experts and making a careful judgment.

He also said that he would clarify and consider that the governors of 1 metropolitan area and 3 prefectures in the Tokyo metropolitan area were required to establish legislation so that they could take stronger steps to business operators who had insufficient infection prevention measures .

On the other hand, Minister Nishimura

(If it is exactly as announced)
There may be more than 5000 tomorrow.

on the bottom of this blog, there is

I hope it can manage to reduce it...