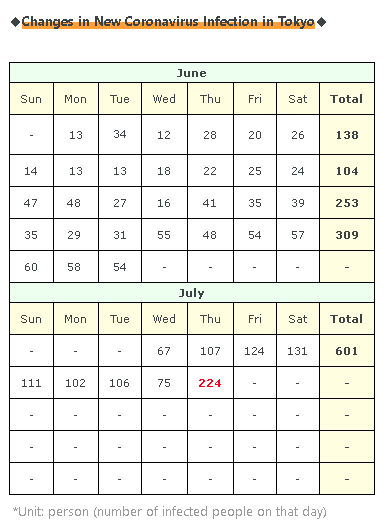 The number of new infections in Tokyo was double digit yesterday, and I was happy, but today a feared situation occurred.

Almost everyone except the government of Japan and Tokyo was worried and afraid...

Well, it's no use crying, so I will summarize

・Infection in the same kindergarten [5 people]

*Kindergarten location is not disclosed

→There are many infected people

in the workplace and school in Tokyo.

→Outbreak in a vocational school [1] person

*From this vocational shcool,

the new infected person [1] in Tokyo.

→Although the prefecture's leave request standard has been exceeded, the medical environment is not so tight. So the government of Saitama prefecture said "We do not have any plans to request leave at this time."

As for "I feel like living in Tokyo where the number of newly infected persons [224] was announced"...
After all, there are so many young people in Shinjuku, Shibuya, etc. at night,

and I wonder if they feel nothing about the increase in the number of people infected.

the number of "unknown infection routes" has finally exceeded 100...

"Still, tomorrow July 10th, the event will be relaxed as scheduled,"

Chief Cabinet Secretary Yoshihiro Suga said at a press conference on the 9th.

It is really painful and irritating that the government and Tokyo do not take measures, but even if we lament so, our actual situation and infection environment do not change, so we can share information with everyone Let's do things!