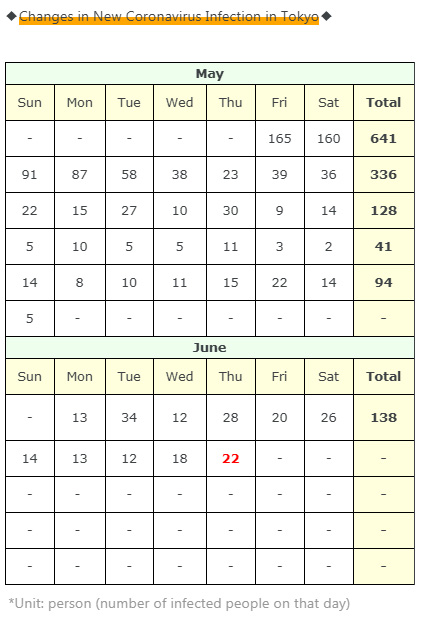 22 (+4 from the day before) new infections confirmed in Tokyo.

The number of new infections in Tokyo has exceeded the target of 20 people...

Nevertheless, Tokyo will move to "Step 3" from the 12th, a few hours later...

Most stores are normally open!

I'm really happy that the request for leave is eased!

even though the number of new infections per day is still so high,

I wonder if it's okay.

I wrote it yesterday, but recently,

so it seems that individuals should be more careful than ever before...

Out of [22] new infections in Tokyo

・Out of the number of newly infected [22] people

[6] people are related to "the entertainment district at night

(I will summarize later)

Regarding to the business suspension request,

According to today's news,

the entertainment district at night, which has been exposing infected people every day,

will be completely lifted from June 19th...

What's more scary is that some host clubs are instructing them to say,

"If you get infected, say you're a freeter."

There may still be some unknown infection routes,

But that really makes me think.

(I'm saying this every day, but)

I can't expect much from the government and local governments to take measures against the "entertainment district at night",

so I have to pray.

Since it is summarized, please take a look if it is good ↓

It has become a difficult time to wear a mask,

but let's try to prevent infection so that we do not have heat stroke and so on!