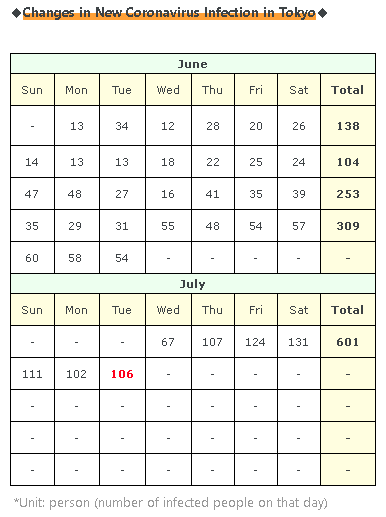 106 (+4 from the day before) new infections confirmed in Tokyo.

The number of new infections in Tokyo continues to exceed 100 for the sixth consecutive day.

Today's number has increased a little compared to the previous day...

→There seems to be no outbreaks,

→What seems to be nosocomial infection [1] person

→There are boys and young children under 10 years old who are considered to have a family infection.

In Tokyo, the number of "the entertainment district at night" is smaller than usual (although it is still high), and instead,

the number of "unknown infection routes" is increasing with the momentum of over 50 people.

I can't help posting it every day, but it's important...,

And there are still many young people in Tokyo who want to go out to hang out even if the number of infected people exceeds 100 every day.

I said yesterday, but there are still many people outside today...

And, as a reaction to the fatigue from the holidays, I often talk with my acquaintances and colleagues that "the way of playing and making noise is worse than before Corona."

How many of the [47] people in today's infection route are related to "the entertainment district at night" or infected through it?

In Akihabara, there was a mass infection of maid cafes, and it was confirmed that 12 out of 394 people were infected when a mass inspection was conducted at two affiliated stores of maid cafes. It is said that they were wearing and disinfecting his mask during work, and that the infection spread during breaks.

You also really have to be careful on the train and at work...