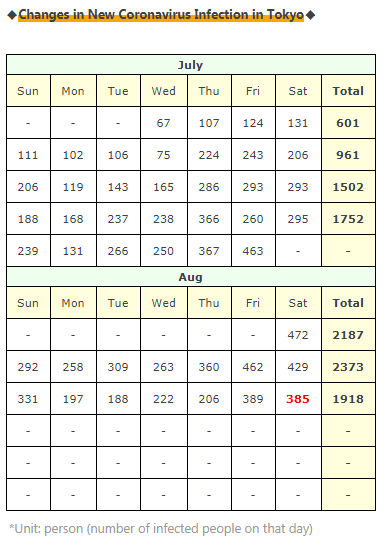 385 (-4 from the day before) new infections confirmed in Tokyo.

The number of new infections in Tokyo did not exceed 400 today on Saturday...

・Infection in the facility [10] people

*One hotel will open on August 17th.

→Men from the US and Malaysia [4] people

I posted it in Aichi prefecture

After all, I think that some people went their parent's home during the Obon season or went on a trip, so I'm a little worried about how far it spreads the infection.

Although it was a mass infection of a host club in Maebashi City, the infection was spread because the first infected male declared ”unemployed” to hide the fact that he was a host.

The investigation was delayed because of a false report.

It seems that some host club are instructing them to say, “If you get infected, say “unemployed!” ”. ..

From here on, I am really sorry that I have posted a long-term summary every day, but since it is important, let me post it today...!

I will write a separate article tomorrow or the day after tomorrow...!

The topic of vaccines!

I'm glad to be able to talk about vaccines!

Actually it's not about the world's fastest developing vaccine from Oxford university and AstraZeneca (this vaccine is my personally recomend !), but it was jointly developed by the two companies, "Pfizer" in America and "Biontech" in Germany, which Japan had the first supply contract with. Results of early-stage efficacy of clinical trials of COVID-19 vaccine have been announced!

As a result of a clinical study conducted in 45 people aged 18 to 55 years, 21 days after vaccination, antibodies were detected in the blood of all people, and the amount of neutralizing antibodies that weaken the movement of the virus also increased!!

Neutralizing antibodies were 1.9 to 4.6 times as many as those who were infected and recovered...

By the way, more than half of the vaccinated people had headaches, but no serious health effects were reported.

The vaccine si also in the final stage of clinical trials, and will be approved for approval as early as October!

What I'm worried in this article is that

"The Japanese government has agreed to be supplied 60 million people by the end of June next year."

But let's hope that this is also a special case of COVID-19 and it will be faster!

Anyway, as with COVID-19 vaccines from Oxford University and AstraZeneca, it seems that there are the same side effects as headaches.

I heard that it had no serious effect on health, so it's just a slight headache or something.

Thinking so, is this "Pfizer" vaccine and "Oxford University and AstraZeneca" vaccine almost the same in terms of their effects and side effects?

If so, the vaccine of Oxford University announced the same early-stage effect on July 21st last month, so it seems that it will come out to the world about a month earlier.

I want them to reach Japan really quickly!

Related to above topic,

here's what I've posted every day, but it's positive information about therapeutic drugs and vaccines! ↓

"Time of disappearance of COVID-19 in each material", but it seems that there are many people who do not know it yet. ..

I was surprised when an acquaintance told me today that "Corona is okay in four or five hours"...

That's not the case!

Depending on the material, COVID-19 may continue to live for several days, so please be sure to obtain the correct information and be careful!

And tell the people around you...

Today is Saturday, so the weekly total of infected people in "COVID-19 Trend Calendar in Tokyo" that I always post at the bottom has been calculated.

Finally! It has decreased from the previous week!

However, there are consecutive holidays and Obon this week, so we have to pay attention to next week.