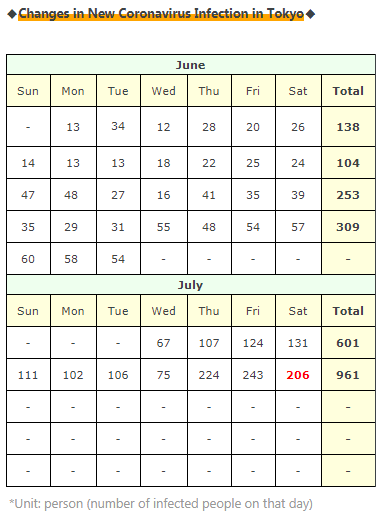 206 (+37 from the day before) new infections confirmed in Tokyo.

Today, the number of new infections in Tokyo has surpassed 200 people,

but it has decreased for the first time in 3 days!

I hope it will continue to decrease from today,

but a few days ago

so we must not break our guard.

But I have to pray for decrease!

in the stage performances held

* All are mild or asymptomatic

→Female employees in their 20s

→Some users have difficulty masking due to the characteristics.

* All are mild or asymptomatic

And I always put it at the bottom of this blog,

So today is Saturday, so I got the total for one week.

Even in June, I was lamenting that "there are a lot of people infected every day...",

bur in July that is already a "abnormally" situation.

And as you can see from the calendar, the number of infected people is increasing more and more (unfortunately) regularly and surprisingly.

I was surprised at the summary,

but it seemed like that could reach 1,000 new infections this week for a week. ..

I hope it will not happen that the number of infected people will exceed 1,000 in a week from tomorrow...

* this is the result of collective PCR test

for about 200 people of "rich contacts"

→ There are many commuters in Tokyo.

→ There are many commuters in Tokyo.

→ There are enployees in "the entertainment district at night" in Tokyo.

was found to be infected with COVID-19 in the subsequent examination.

→ There are several new infected people

→ Collective inspection will be planned

it was announced today that COVID-19 outbreak had also occurred at a US military base in Okinawa Prefecture.

・Okinawa Prefecture announced that the total number of infected persons at the two US military bases, Futenma base and Camp Hansen, has reached 61.

・The number of people infected by the 10th was [16], which is rapidly expanding.

・Two clusters have occurred this week, revealing that access to the two bases is restricted to some military personnel.

I think all American families, Okinawans, and people at the base are worried...

It seems like it's a bad stage if they don't take measures, rather, they had to take some measures before few days ago,

but Tokyo and the government are

■They are trying to enhance the medical care provision system.

However, it is the state that

■almost no measures have been taken to prevent the spread of infection...

I think that those who experience the feeling of despair and inconvenience at the time of a declaration of an emergency are more irritated about this situation...

It's also what I'm writing these days,

as "What I feel when I live in Tokyo",

Indeed, in Tokyo, which is one of the regions where the emergency declaration was the longest,

it seems that there were places that did not comply with the business suspension request, such as some place in "the entertainment district at night",

① Obediently leave according to that request

③ In the worst case, the company or shop goes bankrupt

They occurred in the most of places.

There were some office workers and some people who lost their jobs,

and many of the temporary employees had quit their jobs.

There are many people who work part-time, such as students, who lose their income due to reduced attendance.

And most of the companies and shops in Tokyo are still coordinating attendance, so there are really many people who are still unable to work and their income has dropped sharply.

Still, the Tokyo Metropolitan Government and the government have not taken much measures to "reduce the number of infected people",

and there are still many people who are still hung out with their friends around in the city centered around young people...

So I really want the number of infected people to decrease and converge.

It has already exceeded 2000 people,

and it seems that as soon as 3,000 people have been seen.

since the number of hospital discharges has increased over the past few days,

I hope I can manage to reduce it.

This blog wants to convey information in a lump as much as possible,

and to convey pleasant information without any emotion on me,

but the number of infected people has increased dramatically over the past few days,

We will continue to collect useful information as much as possible!

It is unclear whether Tokyo is "to give priority to the economy" or "to acquire the group immunity",

but it seems that some increase in the number of infected people has already been assumed.

However, it's best not to get infected because of a horrible disease that hasn't even been vaccinated against it.