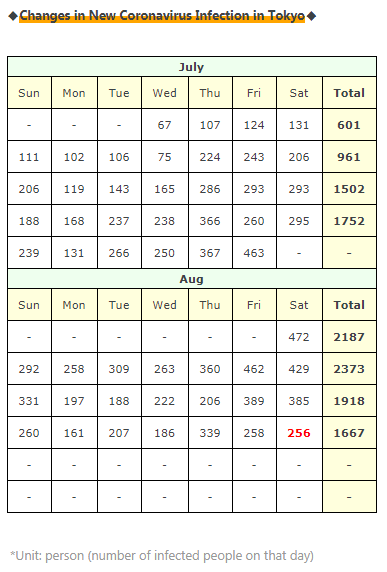 256 ( -2 from the day before) new infections confirmed in Tokyo.

Even Though It's Saturday today, but the number of new infections in Tokyo was surprisingly low, continuing from yesterday! I couldn't believe it the moment I saw it... lol

F..First of all, I will summarize

・Infection in the facility [N/A] people

・Among the infections in the workplace, men and women in their teens to thirties [28 people] are in the same company (?!).

*Although The office was "ventilating, disinfecting, and wearing a mask", but the office was small and they did not have an acrylic board partition.

*In the first half of this month, an employee's infection was confirmed for the first time, and the public health center tested 100 people on the same floor.

*In a workplace with many young people, they routinely had meals and drinking parties outside the company. Therefore, it is unknown whether everyone was infected in the workplace.

→There is no information today....

→Family of two employees of a pub in Naka-ku, Yokohama [2] people

*Related to this pub is cumulative total of 36 people

*Female nursing assistant in her 10s

→Male who returned to Narita Airport from abroad [1] person

*Employee in his 30s

*Returned to Narita on the 8th, test result was negative

→He was Standing by at a hotel in Narita City, then he had 38.1℃ fever and taste disorder

Anyway, what happened to Tokyo?!!

In a good way, of course. lol

The number of infected people are 200 level for 2 consecutive days,

and it's Saturday (there's usually a lot of people infected)!

(I always put it at the bottom of this summary article)

I put a mark on "COVID-19 Trend Calendar in Tokyo", but 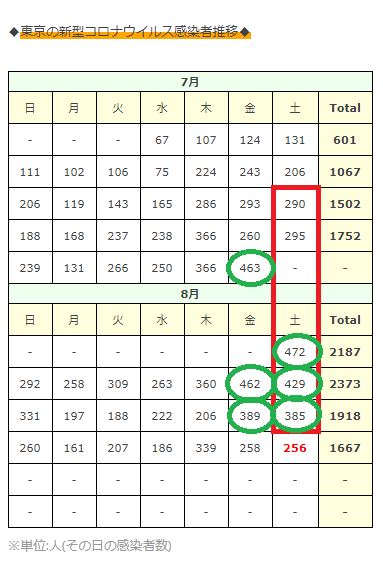 The numbers in the red squares are the numbers for past Saturday, but as you can see, every Friday or Saturday is the day with the highest number of new infections in a week.

It's really a mystery...

However, since there are still around 200 people, there are a lot of infected people, and I think that infection will spread soon if we don't take care of it, so please be careful for a while...

By the way, Regarding that, this is the content summarized yesterday,

It seems that there was a subcommittee meeting for COVID-19 measures of the government on Aug 21.

↑ The content of the link is very long (lol), so I picked up only the important points,

Unlike the number of new infections announced by all prefectures every day,

Based on the "day of onset of symptoms," the number of cases peaked nationwide from July 27th to 29th, and there is now a gradual downward trend!

It seems that the peak number of cases in Tokyo, Osaka and Aichi is also the end of July!

Certainly in Tokyo (it's easy to see from the calendar at the bottom), the number of new infections per day was 450 or more at the end of July and early August,

and from then, it's getting a little less!

There are still many, but...

If it's really decreasing, I'm happy, but...

But if you are not alert, it's a scary point that infectious diseases is spread again.

"Maybe the peak has already passed』

It is the best that next week, if the number of infected people will decrease, and the peak of the new corona will have passed and it will be controled!

How long will it continue to decrease...

It's Saturday today, so the "COVID-19 Trend Calendar in Tokyo" (which I always post at the bottom) came out the total number of infections for this week! 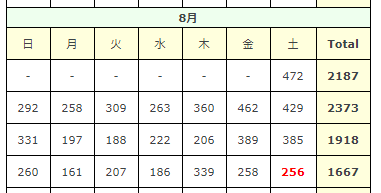 I couldn't say anything because last week was the Obon + consecutive holidays, but looking at just the numbers, it has decreased for 2 consecutive weeks from two weeks ago!

The development of the vaccine seems to be going well, and I hope it will be resolved soon!