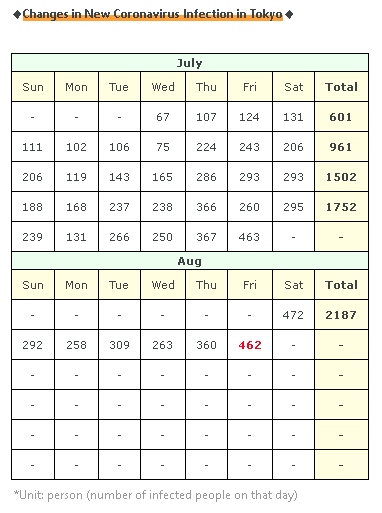 The number of new infections in Tokyo was 462,

which was almost the same as last week on the same day and Friday (463)...

I put it at the bottom of this summary,

It is easy to understand if you look at this,

・Infection at a dinner with friends and acquaintances [22] people

・Infection within the facility [6] people

・Infection from "other" rich contacts [38] people

・Outbreaks of performers and staff who practiced the theater last month

・In "Others", infections of people who went to a trip, golf, or camping with multiple people [4] people

→ Men and women from the Philippines, Korea and China [8] people
→ Arrived on Augus 6
→ All asymptomatic infected

*18 people stand by at home

*No hindrance to city hall operations

*Female nursery teachers in their 20s and 50s

*Female resident in her 90s

→Restaurant with entertainment at night  in Sakura City [5] people

*Next to "daytime karaoke", which was a outbreaks of 38 people in 5 stores

Today's topic of "Expansion of the medical provision system"... it sounds difficult, but the point is that there were some news about measures to increase the number of beds for COVID-19 patients!

First of all, two COVID-19 specialty hospitals will be opened.

①Utilizing the facilities of the "former metropolitan Fuchu Nursing Center" in Fuchu City, the facility will undergo renovation work within October. (About 100 beds)

②Utilizing the facilities of "Tokyo Hospital attached to Tokai University School of Medicine" in Shibuya Ward, the operation is scheduled to start in September.

③Approximately 200 beds are secured at the metropolitan hospital and public hospital.

In addition to this,they will open two accommodation medical facilities on August 13 and August 17 (about 900 rooms)!

It's good to have more beds for medical treatment!

Or rather, please reduce the number of people infected...

Today, I will pick up the other two articles that interest me.

According to this article, the mortality rate was 7.5% of the 2,600 patients who were hospitalized at domestic medical institutions due to COVID-19.

"Significantly lower than in the United Kingdom and the United States, where it exceeds 20%"

even so, one in ten or so will die when people are hospitalized, which is a really scary disease...

"It is necessary to balance infection control measures with socio-economic activities."

“We received feedback on the establishment of an inspection system to restore the flow of people, facilitation of entry and exit between countries, and review of travel restriction levels.”

I think it is absolutely necessary to balance infection prevention and the economy,

but I think it is too early to think about lifting travel restrictions with overseas countries...

I posted yesterday about monitoring conference in Tokyo.

This is the summary↓

・Rate of infected persons by age (one week until August 3)

・infection route (one week until August 4)

・Restaurant with entertainment at night 19.3%

・The highest number of infections was in Shinjuku Ward at 13.9%, but in other areas the infection spreads evenly.

・Although the number of hospitalizations such as middle-aged and elderly who are at risk of seriousness is increasing, beds for the seriously ill are still secured, and the situation is ”still in the second stage out of the four stages".

・In order to prevent overwhelming hospitals, patients who have a low risk of becoming seriously hospitalized by a doctor should be treated at the hotel or at home.

However, considering the fact that people in their 20s account for more than 40% of the total number of infected people, their daily behavior will determine whether or not they will be infected. ..

Of course, I know most of the people in their 20s are careful about preventing infection...

Then it is a summary of the vaccine ↓

Today, "The least summer vacation in Japan elementary and junior high school" was the news.

It is said that it is only 9 days from August 8 at elementary and junior high schools in 6 cities and towns in Gifu prefecture. .. .. !!

I hope it was a good memory because it was short...