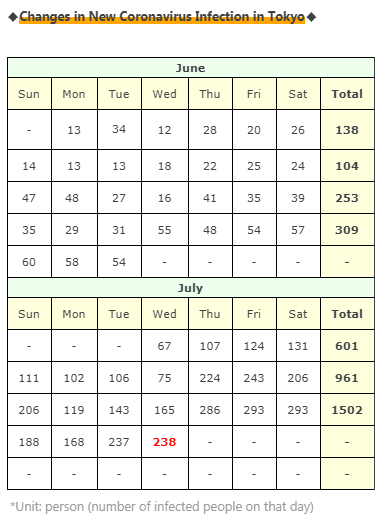 238 (+1 from the day before) new infections confirmed in Tokyo.

The umber of new infections in Tokyo has increased as expectd...

However, we have already experienced it several times that "the number of newly infected person is small for a few days before the big increase".

So I was afraid that there would be more than 300 people today because the number of people infected was small yesterday and the day before yesterday.

As a result, the number of infected people today was in the low 200s, so I was a little relieved.

There are still too many, though.

→other in the entertaiment district [2] people

・Infection at a dinner with friends and acquaintances [15] people

→ They gathered privately in early July

*Inspected because the person who was there was infected.

→ The facility had nosocomial infection in 10 people

from April to May this year

→ Users and health care worker in their 20s and 80s

→ I posted this information yesterday, but this number of infections is for today,

It seems that the number of quarantines at the airport is increasing and screaming.

At Narita Airport, the number of inspections exceeded 1000 at the end of June, and the departure flight to Shanghai China was delayed. ..

According to the Yomiuri Shimbun's summary of the stage where the mass infection occurred in Shinjuku, infected people are at least 115 people in 11 prefectures.

The situation was about 130 square meters, with about 90 seats, which is about half of the total number of seats of 186, were prepared, and they were playing games in addition to singing and dancing.

Furthermore, from here, the family and workplace of the infected person are infected, and it seems that 115 people are not included, so it became a really enormous outbreak. ..

*Infection from family living together.

→Among infected people, many commuters and visitors in Tokyo

*They are investigating rich contacts because he sees 70 people two days before the onset of symptoms.

“We have to recognize that the “second wave” has arrived."

In prefectures other than the above, many prefectures, including Kyoto, Hokkaido, Fukuoka(53), Hyogo and Gifu etc. have new infections of 10 or more.

And the start of "Go To (Travel) Campaign" is from today!

Even today, there were more puzzling news about the "Go To Campaign" than positive news.

The analysis data of NTT DoCoMo shows that the number of people who moved across Tokyo and other prefectures on Saturdays and Sundays (July 18th to 19th) last week compared to last month.

Other prefectures → 8% decrease in Tokyo

Within Tokyo → 10% decrease in other prefectures

It is said that they are vigilant that Tokyo was removed from the target of the "Go To Campaign",

anyway, it is nesessary for Tokyo to reduce the number of infected people.

And in order to reduce the number of infected people,

it is important to appeal to people who are not aware of prevention.

However,
In conclusion, vaccine development = the fundamental solution to the world of COVID-19 will be coming soon, so let's be careful to prevent infection until then!