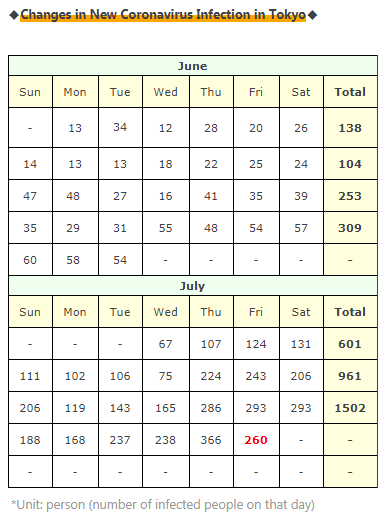 Since the number of new infections in Tokyo is Friday today,

To be honest, I was delighted the moment the news about the number of infected people in Tokyo came out!

…But if I think carefully, today is a holiday and consecutive holidays…

And since there are too many 260 people, I just hope that tomorrow will have more...

*In Kumamoto City, where she was going home

*Homecoming to check the status of my parents' house in Kumamoto"

*One female doctor in her 30s

*15 doctors and nurses with rich contacts are waiting at home

*Acceptance of new patients has been suspended since 24th

As usual, quarantine at the airport has been found positive every day… The accuracy of the PCR test is 60 to 70%, and I'm worried that the infected person may not pass the test.

(Although I posted it yesterday)

It seems that the number of quarantines at the airport is increasing and inspectors are screaming.

At Narita Airport, the number of inspections exceeded 1000 at the end of June, and the departure flight to Shanghai China was delayed...

As in this news, Japan and Thailand have agreed to allow mutual entry...

When we heard that the government accepted foreign entry, we want to say "Why?"

However, in reality, the number of new infections in Thailand these days is one digit (several) every day, and it seems that those are only those returning from abroad...!!

Rather, Japan has more new infections,

so we have to say "Thank you for mutual admission."

By the way, as a measure for long-term residents such as corporate employees,

it is necessary to carry out PCR test and wait at home for 14 days after entering the country.

If that's the case, it's even more secure.

The same applies to quarantine at airports, but I feel strongly that it is necessary to take precautions against infections from a little thing.

→From the press, there are only news of individual infections.

→There was also some information about infected people living in Tokyo or working in Tokyo.

* Cumulative total of 9 students (in the same circle-related)

*She was visiting a friend who lives in Sagamihara city.

*After staying at a medical institution or accommodation facility,

staying at a hotel

*Re-examination for returning to India on 20th → Re-positive

*A colleague has already confirmed infection at a nursery school in Hyogo prefecture.

*Since her husband was found infected on the 19th, she took a break from work before the onset of symptoms, so there was no effect on the facility.

*Female employees in their 50s in Matsudo City

→"the entertainment district at night" in Chuo-ku, Chiba

*After the outbreak of 7 people,

the examination of the remaining 6 ends

*Tracking infected persons based on the list of store users

→US military base "Camp Hansen" [2] people

*Cumulative related to US military = 165 people

In prefectures other than the above, many prefectures, including Nara, Fukuoka, Hyogo, Kyoto and Kagoshima etc. have new infections of 10 or more.

I posted on this blog yesterday,

And from yesterday, it was the first consecutive holiday since the "Go To (Travel) Campaign" started.

There were fewer people in Tokyo during the day than I expected today.

Although it was not so much as during the emergency declaration, it seems that there were 20 to 30% fewer people than usual, probably because 366 new infections were effective yesterday.

However, I think that people who are noisy or have dinner at Shibuya, Shinjuku, Ikebukuro, etc. at night should be careful or refrain a little bit.

There were more puzzling news about the "Go To Campaign" than positive news.

In this way, it seems that in the United States it has exceeded 3 million on July 8th this month, and has exceeded 4 million in just two weeks, so I don't think it is not the place when peple are hanging out with their friends outside.

However, Japan has been able to almost converge the infection even once, and I think that it will definitely be converged, so I would like you to take another step and move towards the convergence by some reason.