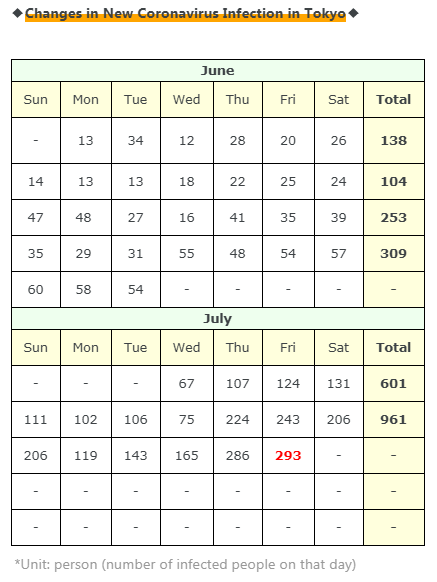 293 (+7 from the day before) new infections confirmed in Tokyo.

The number of new infections in Tokyo has reached a new record high...

And today, the number of new infections seems to have been quite high nationwide.

I dreamed of "converging" even at the end of May..

・Infection at a dinner with friends and acquaintances [24] people

→ Men and women in the Philippines [8] people

Every day, the number of infected people is gradually increasing in prefectures other than Tokyo these days, and the infection has been confirmed even in the areas where the infection had subsided. ..

So today, I would like to summarize not only the neighborhood of Tokyo but also the prefectures with a large number of infected people.

(*Free PCR test for entertainment district at night in Omiya)

→For all "cabaret" and "host club" employees

operating in the Minami Ginza area of ​​Omiya Ward

→ It is said that there are about 100 stores (the number of employees is unknown) in the same area, but the actual application is limited to 13 stores and 118 people.

→ Today there is no infected people.

→Many other university students and elementary school students

It is not listed because the details are not known, but in addition to the above, infections of 10 or more people have also been confirmed in Aichi prefecture, Kyoto prefecture, Hyogo prefecture, etc.

(Even I, a citizen of Tokyo and involved in the tourism industry)

I'm in favor of excluding Tokyo in the "Go To Campaign", but I don't think it's a case of planning anymore if other regions are confirmed to have double-digit infection. ..

And also governor Koike consistently claims that the increase in the number of confirmed infections in Tokyo is due to the increased number of tests.

The factor that increased

In addition, it is said that it will take about 3 days from the time of the inspection to the confirmation of the infection, and the large number of inspections on Monday led to an increase in the number of new infections on 16th today, an executive in Tokyo believes.

Since the positive rate has also risen from 1% to 6% or more, the infection is simply expanding without a doubt. Not only because of the increased number of tests.

I wonder if I will take appropriate measures soon... ..