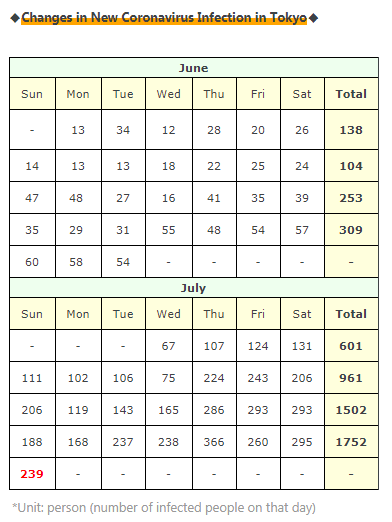 239 (-56 from the day before) new infections confirmed in Tokyo.

It was Sunday, and the last day of the consecutive holidays, but the number of new infections in Tokyo did not fall and remained at the 200 level...

If it doesn't decrease to under the 200 level,

I'm afraid that the number of infected people of weekdays from tomorrow will be over 500 people, not just 400 people, especially on Thu, Fri and Sat...

→Including the unknown infection route = [16] people

・Institutional infection such as day service and nursery [8] people

→ Men and women from Pakistan, Brazil and the Philippines [6] people

It's 21:10 at the moment, but the full details of Tokyo haven't been released yet.

I think that it was already announced around 20:00 when it was under the emergency declaration such as Apr and May...

It is an image that the full details have been announced recently after 23:00.

The number of new infections in Tokyo is from 9:00 am to 9:00 the next morning, so it seems to be almost the same as the previous day.

However, there are many places where details are announced after 21:00 in other prefectures, and the people in charge including each prefecture are working hard also at this moment.

I would like to know "details" as a preventive measure against infection,

and I am always grateful to those people.

Also today, I will summarize some prefectures that have a high number of infected people, not just in the Tokyo area.

*The school is temporarily closed on the 27th

*Men in their 40s at the Life Safety Division

→Medical institution in the prefecture [1] person

→Others include workplace infection,

*No cluster information was found.

*This hospital has a large-scale nosocomial infection

→Nursing facilities in the prefecture [1] person

*Female nurse in her 50s in Sakura City

→There is no information today, but

over 100 people for 5 consecutive days.

→There is no information today

→US military base "Camp Hansen" [6] people

→US military base "Camp Zukeran" [1] person

*Cumulative related to US military = 236 people

*It is not counted as the number of infected people in Okinawa Prefecture.

→Outbreak is occurring at two restaurants in Hamamatsu City [18] people

In prefectures other than the above, many prefectures, including Kyoto, Hyogo and Kumamoto etc. have new infections of 10 or more.

Recently, there are many areas other than Tokyo where the number of infected people is approaching 50 or 100,

so we would appreciate it if they can give us more details on the same day.

Because we can be careful when we go to work or go outside...

And today is the end of consecutive holiday in Japan!

It was raining mostly in Tokyo during the 4 consecutive holidays, but what about other areas?

However, since heavy rain disasters have continued in western Japan for another couple of weeks,

I'm worried as I have a strong connection to western Japan.

It's not the time of thinking about "Go To Campaign"..., right?

it seems that today's Minister of Economic Rehabilitation Nishimura indicated at a press conference that he should request thorough measures such as telework and flex time, as well as prevent people with poor physical condition from going to work.

Other than that, he said that people should refrain from drinking and meetings with a large number of people, promote the installation of a contact confirmation application, etc.,

That's not the case what we expect of him.

At the end of the article, he ended up verbally, but he must do something more effective measures, such as "police or government entering the store and checking the preventive measures," and closed the store where is not abide by.

He already had to do that rather than I want him to do that.

In the first place, "Let's do it! "There is a certain number of people who do not abide by it, so the infection is spreading...

It's not really an elementary school goal...

An expert teacher is pointed out here,

"Now she just says, "please stay at home," and I get the impression that she isn't doing anything. "Tokyo Alert" was lifted before the Tokyo Governor's election.While she is saying "it's OK", the number of infected people has increased dramatically. It's no wonder that there are no concrete measures."

After a person moves from Tokyo to other area, the number of cases where the person is confirmed to be infected in that area is increasing,

and I cannot help saying that Tokyo is the starting point for the spread of infection nationwide.

It is even said this way.

It is easy to understand if you look at the state of emergency declaration, the infected people are decreased.

So it is really "just take measures"...

Well..., to change the subject again,

"Calendar of the changes in New Coronavirus Infection in Tokyo"

How many more people will be infected this week starting today?

The maximum number of new infections beforethe consecutive holidays was [366],

so I have a bad premonition this week, but I hope it can manage to stop.

This week as well, I will make an easy-to-understand and easy-to-read "summary",

so let's all be careful to prevent infection and stop the infection at our own place!