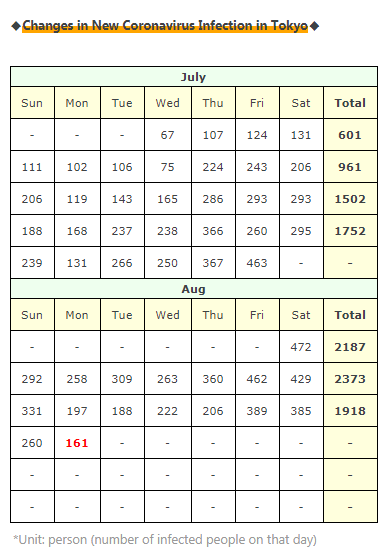 161 (-99 from the day before) new infections confirmed in Tokyo.

The number of new infections in Tokyo was 161, which is quite small in recent times, since it was Monday!

About [161] people,
it seems that we are paralyzed enough to think that "it's quite small"...

There are still too many...!

・Infection in the facility [1] people

*Female in her 30s nursery teacher

→Men and women from Korea and the Philippines [3] people

*There was no rich contact because she was wearing protective clothes and high-performance masks.

・There is no infected people at US military base today.

Today, the number of infected people is too small all over the country,

so first of all, I couldn't believe the number because before I tried to write this article, I was too tired and took a nap for a while.

I thought "Is it reality? dream? Is it correct?" lol

However, on Monday, the number of new infections is small every week, so I hope that it will decrease from here rather than not really increasing this week...

The number of infected people in Okinawa was also small today.

However, when we compare to infected people in each prefectures, converted to per 100,000 people,

The number of infected people today

In this way Okinawa is more than twice as large as Tokyo.

I hope Okinawa will not increase from here at all...

In Tokyo these days, the word "peak out" has begun to appear in the news.

This is starting to be used by the media in the sense that "the number of infected people in the last two weeks is the peak number, and is it gradually decreasing from that?"...

…… Still too early to say about it!

You should judge after looking at this week's numbers (the influence of consecutive holidays and Obon has disappeared) ...

You shouldn't think about COVID-19 easily! Be too alert!

I would like to say to the media! lol

And today, data on the movement of people in Obon came out.

Percentage of people who came from other prefectures

(The smaller the percentage, the fewer visits from Tokyo than last year)

*Less than half of last year's people have moved from Tokyo to all regions.

Areas that have moved a lot from Tokyo

*Almost same as the last year.

*Compare to last year, all regions have less than half the number of people who visited Okinawa.

Transfer to Okinawa (by prefecture)

*In most prefectures, less than half of last year's people went to Okinawa.

it seems that the number of people who stayed in Tokyo increased by 9% or 850,000 people from last year.

I hope this will change the trend to reduce the number of infected people...

It's nice that things are decreasing recently!

In Korea, nearly 200 new infections are coming out all over the country every day,

Even in New Zealand (which should have been completely controled COVID-19), several tens of people have been confirmed every day since the infection of four family members was confirmed in about 10 days before.

Even if you are really careful, the infection will spread,

especially if you are not careful...

It's a really difficult disease...

Everyone here is where you can do your best! ?

Let's be more careful in prevention!

I want to quickly control and return to normal life! (Crying)