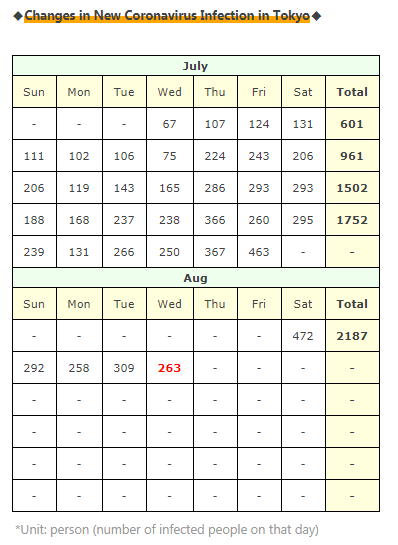 263 (-46 from the day before) new infections confirmed in Tokyo.

The number of new infections in Tokyo has dropped by about 50 from yesterday.

However (although last week),

the number of infected people decreased a little bit on Wednesday, and when I feel relieved, there are many patterns that the number increased dramatically on Thursday, so I have to be careful.

・Infection within the facility [8] persons

・Infection from "other" rich contacts [28] people

・"Others" above... People who were infected in a car by driving with a friend [3] people, etc.

→ Men and women from the Philippines,

Even so, why is the number of new infections so low on Wednesday?

The reason why the number of Sundays, Mondays, and Tuesdays is low is fixed because the person in charge of Tokyo said yesterday that there are many medical institutions that are closed on Saturdays and Sundays, but Wednesday is a mystery...

About this information compiled on August 1st...

*He broke the lock and escaped from the hospital despite a COVID-19 patient. And moved to everywhere in Saitama prefecture.

”It’s a shame, If there is a person who refuses to be hospitalized or has left the hospital, the hospital will be forced to take "measures" based on the Infection Law.

*Rich contacts of students whose infection has been confirmed

*Female physiotherapist in her 20s

*Female physiotherapist in her 20s

*A woman in her 90s who died in Chiba prefecture today

→Residents of "Matsudo Yodari-Mari" where a mass infection is occurring

*She was hospitalized at a medical institution in the prefecture, but she was preparing for discharge because her symptoms had settled down, but she was negative on the test on Aug 4 before discharge, but after that she suddenly changed her condition and became Died in the morning on Aug 5.

This is the part that I posted in the total column of Tokyo few days before. ↓

This is a statement from a person in charge of Tokyo who actually collects information on infected people on Saturday, August 1, when there were nearly 500 infected people.

"If you stretch your wings too much on holidays, you will get infected"

You can see that by looking at this...

It's the summer vacation season, and the rainy season is over and it's getting hotter. It's the season when you want to go out, but when you go out, be careful of infection control.

And one more thing I can feel...

It seems that perhaps the test method or the number of tests has become easier to carry out, the infected person will be known within 6 days after the infected day.

So from now on, COVID-19 can be detected in less than a week after the infection. It means that.

I was a little surprised because it was said that it was 2 weeks ago.

The inspection system is also evolving.

From this topic today...

Although it is not in Tokyo, it seems that the cooperation fee of 10,000 yen for requesting shortening of business hours is too small,

"There is no meaning in that amount",

one restaurant in Aichi prefecture will open as usual until 24:00. Apparently decided.

Many times companies and shops are already in a state of dying due to repeated declarations of emergencies, and they are about to forced to live or die, or to crush their own company,

but the government said "Please refrain from cooperation with 10,000 yen",

I'd like the government of each prefecture and Japanese government to think a little more and take measures.

Recently, statistical articles related to COVID-19 are continuing in the news.

Governor Koike often says, "The number of new infections announced daily every day is high because of the large number of tests."

Positive rate (*% of people whose test result is "infected")

The person in charge in Tokyo said,

"Because the inspection system has been set up, it is also a factor that the number of infected people is increasing because the person who is not a rich contact person or the person who does not have symptoms has been confirmed to be infected"

In the first place, we are aiming to control COVID-19, but the problem is that there are many infected people...

I would like Governor Koike and the government to understand the problem...

Today I just talked about this vaccine several times with my acquaintances and colleagues... but it's only one or two months left...!

It was today when I realized that I was really happy to think about the vaccine will be completed soon. (Lol)

Today, I have carefully selected articles more than usual and summarized them in a simple way!

There are too many contents to convey, and I want as many people as possible to see the information,

so I often post the same summarized contents that already posted few days before every day,

but I am worried because the summary article itself is getting longer and longer.

Because I think that people probably rarely read articles from past dates...

Well, I will continue to do my best, so let's share the information with everyone and survive through this difficult time together!