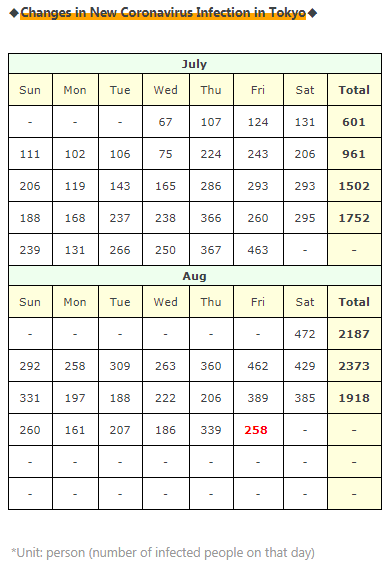 258 (+81 from the day before) new infections confirmed in Tokyo.

I doubted the number of new infections in Tokyo the moment I saw it.

It's Friday today, when usually big number come out, but less than Thursday? ? ?

Either way, I'm glad that the number of new infections is small!

For your informaiton, the last Friday is like this... ↓ 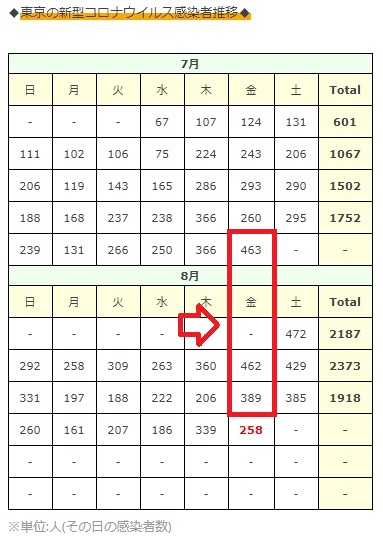 For the time being, I was happy that the number of infected people was small, so today's dinner is more delicious than usual! lol

・Infection in the facility [3] people

・Infection via other routes [9] people

・In some cases, a man in his 30s was infected by participating in a gathering of relatives outside Tokyo.

・Two men in their 40s and one woman in their 20s went golf and were infected.

*Female nurse in her 40s

*Employee in his 30s

It Seems to be finished as planned in most prefectures...

→ It seems that it was finished today (unfortunately)...

And the number of infected people did not decrease at all...

→It seems to start again from the 25th.
The close of schools has been extended for only one day more than they planned.

Okinawa seems to be decreasing a little when we are looking for yesterday and today.

Fukuoka is also in a state where it cannot be called "dramatically reduced"...

Well, I didn't think that the number of infected people would decrease due to the shortened business hours.

In any case, it would be nice if it could decrease.

As I said on Twitter, I'm really confused... lol

Well, before the information of the vaccine that I always put...

Over the past few days, Various people who are experts, governor etc., have been discussing a lot about the "priority of vaccination."

It's not just the article with the URL I just posted, but most of the news and meetings talk about "prioritizing medical staff and the elderly", and that's true.

It goes without saying that medical staff and elderly people are given top priority, and it is natural that they must be discussed in advance.

before that, negotiate to get the amount that reaches all the people from the first supply...

How long will it continue to decrease...

It seems that there was a subcommittee meeting for COVID-19 measures of the government today.

↑ The content of the link is very long (lol), so I picked up only the important points,

Unlike the number of new infections announced by all prefectures every day,

Based on the "day of onset of symptoms," the number of cases peaked nationwide from July 27th to 29th, and there is now a gradual downward trend!

It seems that the peak number of cases in Tokyo, Osaka and Aichi is also the end of July!

Certainly in Tokyo (it's easy to see from the calendar at the bottom), the number of new infections per day was 450 or more at the end of July and early August,

and from then, it's getting a little less!

There are still many, but...

If it's really decreasing, I'm happy, but...

But if you are not alert, it's a scary point that infectious diseases is spread again.

So for a while longer,