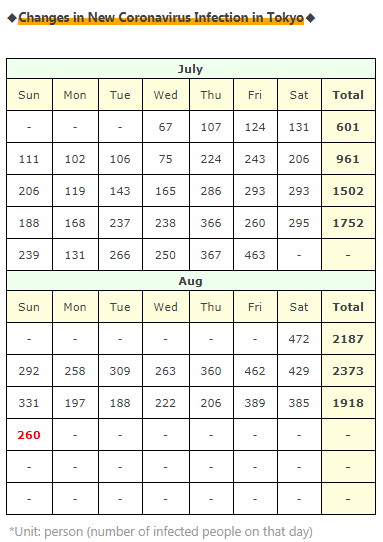 The number of new infections in Tokyo was 260 today.

By the way, last week was a little small throughout the week, but since this week's real number will start from today, we have to pay attention to this week's number.

・Infection in the facility [8] people

* 70 people had a PCR test, all others were negative.

*One hotel will open on August 17th.

→Men and women from Korea and the Philippines [3] people

→Employees of a restaurant in Yokohama City that can karaoke, and their families [1+4 people]

* She had a fever symptom during work, but she always wore a mask when she was working and took measures such as shifting the rest with other staff. There are no rich contact people.

→There were many other infections related to hospitals and welfare facilities.

*It seems that there has not been a mass infection

Recently, I have a things that I was wondering,

so I tried redlining the letters in Kanagawa.ll.

* She had a fever symptom during work, but she always wore a mask when she was working and took measures such as shifting the rest with other staff. There are no rich contact people.

Recently, there are a lot of judgments such as

"It's okay because the infected person was wearing a mask", and

I think you understand because everyone is masked, but there are some gaps in the mask! ?

You can prevent splash infections such as sneezing and runny nose.

"It's okay if you don't have contact after the onset (even if it's the day before)!" ..

This is also scary.

I think it is to reduce the burden on the public health center, and I can not say anything because I can not find out what happened after that,

"No problem(mass infection) has occurred even if you judge so far, so it's okay."

(If there is a problem, the "I'm masking OK" rule should be gone)

We have to believe that way.

Today's data for Tokyo is unusual that,

In this way, the infection route was unknown in the 50% range!

No... I'm not happy because there are still too many...

is the same every day, so I'd like to expect this change to be a good sign!

In this way, the ratio of those in their 20s to 30s, which was usually around 65 to 70%, also gradually declined, and today it suddenly reached 52%.

Unlike the last time, this feels bad...

Because I felt that rather than the number of infected people in their 20s and 30s decreasing, it seems that the infection has spread to other generations...

Because the total number of new infections has not decreased. ..

the infection in the 20s to 30s is also spread to other generations.

We can not be pleased at all even if this ratio falls because of the reason...

I didn't have a conspicuous article today,

so I took a closer look at the numbers I've always put together.

There are various things to think about even with the daily changes in numbers.

After that, I'm worried that the number of deaths and seriously ill people has been increasing in recent weeks...

COVID-19 is still a scary disease for which there is no perfect cure.

To protect yourself and your loved ones,