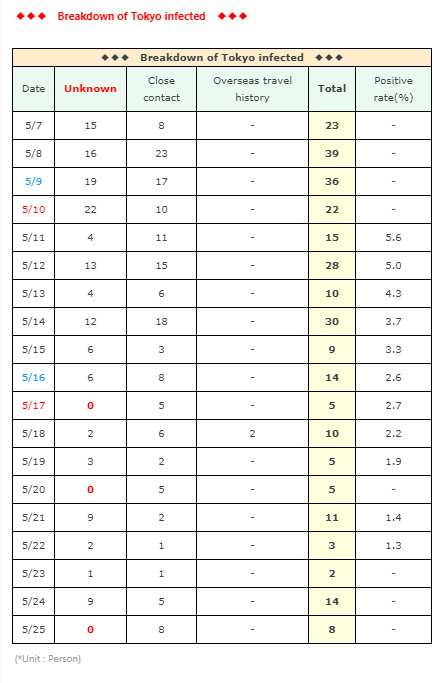 The emergency declarations for Tokyo, Kanagawa, Saitama, Chiba, and Hokkaido have finally been lifted today!

Before it is really lifted,

I thought that it would be uneasy because the number of new infected people sometimes exceeds 10,

but I am really happy when it is actually lifted!

the companies and shops will be gradually restarted,and I am very happy with that,

but at the same time,

I think that the number of people will increase (return) in the city,

so now we have to be more careful than that.

I also live in Tokyo, but everyone in Tokyo and other prefectures must be careful.

So, this time, the number of people with unknown infection routes in Tokyo, which I uploaded the other day, has passed a few days, so I'll update the recent trends!

Of the new infections,

"Unknown route of infection"= "They don't know where they were infected",

and then they might have been infected in the town, which is very uneasy.

"Isn't it safe if there are 0 unknown infection routes?"

That's why I examined the breakdown of newly infected people in Tokyo and made a table!

I think "Is it safe if there are 0 unknown infection routes?"

so, this time I decided to look into the breakdown of daily new infections in Tokyo from the beginning of the GW (Consecutive Holidays in Japan around early May) and made a table!

Everyday, I made the table of follows,

I made the calendar like this to count the number of infected people in Tokyo that day,

but this time it's a breakdown!

5/12 "There have been a number of reports of cases of being seen as a meal with friends as an infection route.

The number of unknown infection routes was reported by 0 people

If this continues all the time, I'm relieved...

= We don't know where we got the virus

If it means that,

= "Viruses have not spread throughout the city"

As I wrote here,

・ "Unknown ratio of infection route is less than 50%"

Since it seems to be one guideline, I am worried about that,

but in the first place I feel a bit scared that the infection route is unknown.