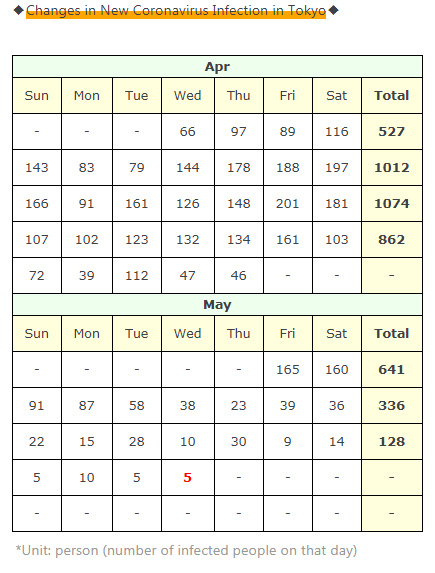 5 (+-0 from the day before) new infections confirmed in Tokyo.

The number of new infections in Tokyo was the same as yesterday, only 5!

in Tokyo on the 20th today! Those who did not know the infection route were 0! ! !

It's not that widespread in the city, so I'm too happy!

In addition, the estimate of how many people are actually receiving medical treatment today ...

It seems that the number of people who are undergoing medical treatment nationwide will soon drop to 3,000!

Finally, I can see the goal!

Tomorrow is the "day to consider the cancellation of the emergency declaration".

Of the remaining eight prefectures,

Kansai (Osaka, Kyoto, Hyogo) is in the process of being canceled,

so other areas may be up to the committee.

In particular, in Kanagawa, the infection is spreading...
18 people today ...
Moreover, it seems that not only hospital-acquired infections but also some people whose routes are unknown in Kanagawa.

It's not too strange to say "Borderless" in the Kanto region,

I'm worried that if all the neighborhoods haven't converged.

Because we cross prefectures every day for commuting to work or going to school.

I want them to cancel the emergency declaration as soon as possible,

but I do not want them to spread the infection again ... It's a difficult place.