It may depend on the region,

but in Shinjuku and Shibuya in Japan, I've been surprised to find foreigners in the city.

Until the situation of this new type of coronavirus (COVID-19),

I thought that, but nowadays almost all foreigners do not see it when I go out because of unavoidable work such as work. ..

(Inside and outside 23 wards)

It's a self-restraint period, so it's natural that most of the shops are closed,

bur it feels like "an unusual scene" continues every day. ..

The introduction has become long!

It was a little while ago, but there was this!

Riko Muranaka, a doctor and medical journalist, mentioned on the 4th the problem of the PCR test in Japan, which was criticized for not increasing the number of tests on his Twitter. "It's only Japan that thinks PCR is a panacea for grasping the epidemic situation," she posted.

Muranaka further quoted the British Imperial College report, "Even if the PCR test is performed blindly to asymptomatic people, the effect of spreading infection will not be improved. It was concluded that it is effective to detect and isolate concentrated contacts and early release of suspected infections through conducting PCR tests on infected people. " I want you to read it. "

Regarding PCR test, the sensitivity is low at about 70%, and there is a risk that false negatives will occur at about 30%, and multiple tests are required to improve accuracy.

On the other hand, there are many patients who are said to be "PCR refugees" who have a symptom of being suspected of corona infection, but who can not easily reach a test.

I have read the source of the article,

①The Maximum amount that can be inspected is limited anyway,

so it is necessary to do it strategically.

②Although inspection is essential to follow the infection route,

it does not have the effect of suppressing the spread of infection itself.

(The preventive effect is likely to be limited to patients, medical staff, and high-         risk groups)

is what they said.

Certainly I feel that it is said

but because of the current situation that they have not been able to accept PCR tests even though they sick so far,

"they should increase PCR tests anyway!"

I think that's the background to what everyone says,

so first of all goverment should thoroughly examine those who need it.

If PCR tests are carried out indiscriminately like in other countries,

it may cause medical collapse,

and there is a possibility that

they may become infected while waiting for the tests, and in the first place,

the doctor himself says

"There are many unnecessary PCR tests".

It's a difficult problem because many people in the field have pointed it out,

since May 4(Prime Minister Abe's declaration of extension),

looking at the online report I often see

that any person got a PCR test relatively soon after contacting the public health center,

so I hope that it can be resolved.

To the bottom,
I attached the tweet that was the source of the Yahoo article and the reply to it.

↑This is the source of the Yahoo article.

When I looked at the actual report,

I found that the interpretation was a little strange,

so I will include the reply of the person who is interpreting it firmly! 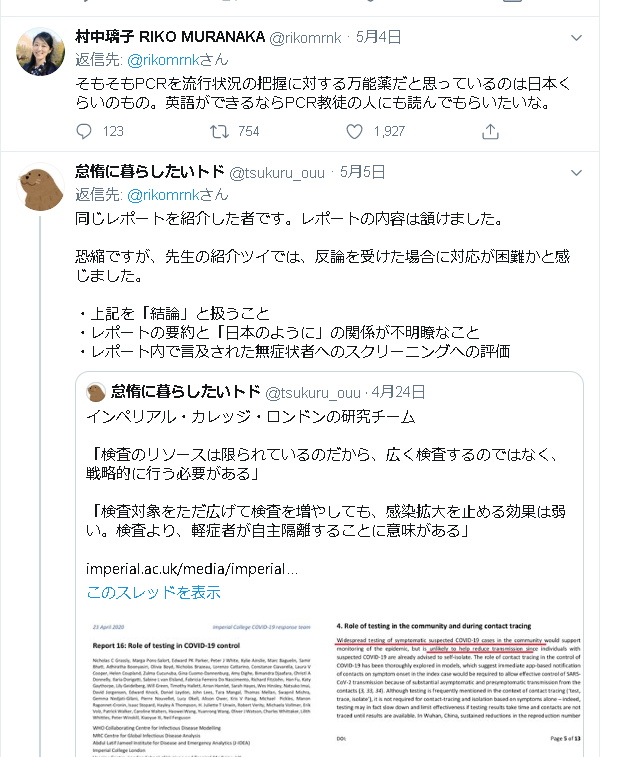