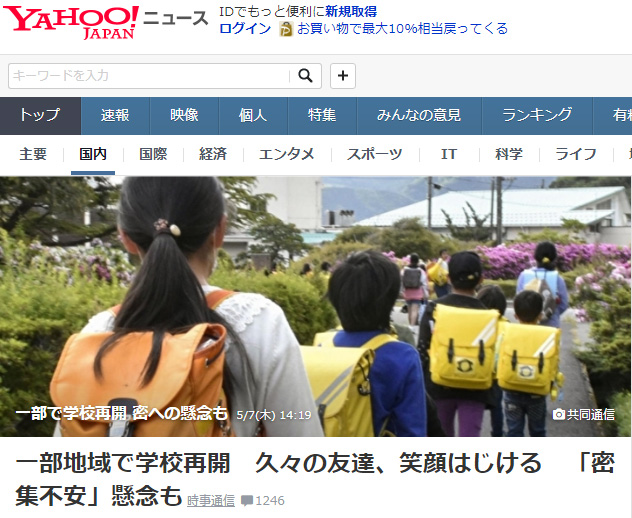 The extension period of the new coronavirus (COVID-19) emergency declaration has started nationwide from today!

The extension period is until "May 31st",

but it seems that the government's policy is to gradually deregulation the prefectures that seem to have converged mainly in schools.

And immediately, the prefecture where the school was restarted was in the news!

The school was reopened on the 7th in Aomori and Tottori prefectures, ahead of the rest of the country, after completing temporary closures and large holidays to prevent the spread of new coronavirus (COVID-19) infection. The children and students smiled and asked, "Is it fine?", But some parents expressed concern about the school life, in which "3 denseness" was unavoidable. This is the first time that the school has restarted at the prefectural level since the emergency declaration was expanded nationwide.

Tottori City Meitoku Elementary School, which has been closed since April 27. The boy (8), who was the first rider and came to the school gate, was a 3rd grade elementary school student and smiled, saying "I've been at home all the time and I'm looking forward to lunch and meeting friends."

A total of 76 prefectural schools, including high schools, reopened in Aomori Prefecture, which had been temporarily closed since April 20.

And alsoAomori hasn't had new infections since April 28th!

if the government restricts the movement of people between prefectures even during this period.

Even so, it's good news that you can feel it's becoming a daily routine!

I hope this happens nationwide sooner!

※Regarding to COVID-19 in Tottori

※Regarding to COVID-19 in Aomori