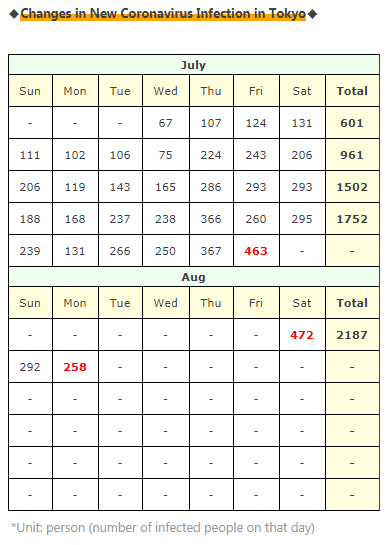 258 (-34 from the day before) new infections confirmed in Tokyo.

The number of new cases of infection in Tokyo yesterday's Sunday (292) and today's Monday (258) did not decrease to that level...

It is easy to understand by looking at the  "COVID-19 Trend Calendar in Tokyo" at the bottom of this summary article, but Sunday and Monday have the lowest number of infections in a week (Sunday to Saturday). However, what will happen this week if there are still 292 people and 258 people for the past two days? ...

It's too big number when I thinking about Sunday and Monday...

・A male in his 30s, a business operator in the meat market of the central wholesale market in Minato Ward [1] person

*Measurements such as masks and gloves are taken, and there are no rich contacts

*The Nerima Pension Office was closed from July 29th, but it will be restarted from 3rd

→New infected people are [6] people there

It seems that there are some closures at pension offices, but it's really annoying that administrative offices are closed. ..

Everyone has to be careful, and there are some things that can not be helped to some extent, but I especially want those people to be careful.

→Outbreak of nursing home for the elderly [1] person

*The name is "Aoi-no-Koshigaya Lake Town"

*Two students belonging to the same club were infected.

*It's during summer vacation now, school activities such as club activities and supplementary training are suspended for the time being

*Females in their 40s who are involved in rehabilitation work

*Tested because she was a rich contact with the infected person

where they can enjoy "lunch karaoke" [3] people

*Since there are multiple store users, it may be infected via customers.

*Under investigation due to nosocomial infection

This is the part that I posted in the total column of Tokyo few days before. ↓

This is a statement from a person in charge of Tokyo who actually collects information on infected people on Saturday, August 1, when there were nearly 500 infected people.

"If you stretch your wings too much on holidays, you will get infected"

You can see that by looking at this...

It's the summer vacation season, and the rainy season is over and it's getting hotter. It's the season when you want to go out, but when you go out, be careful of infection control.

And one more thing I can feel...

It seems that perhaps the test method or the number of tests has become easier to carry out, the infected person will be known within 6 days after the infected day.

So from now on, COVID-19 can be detected in less than a week after the infection. It means that.

I was a little surprised because it was said that it was 2 weeks ago.

The inspection system is also evolving.

Also today (I don't know if I can do it or not) there was an article about the Tokyo Paralympic Games related to the Tokyo Olympics next year.

It seems that the schedule will be held one day ahead of schedule at the same venue and schedule as in 2020.

The article also lists the dates for each event...

I hope the vaccine development goes well and the Tokyo Olympics and Paralympics next year can really be done...

There are some people saying,

But if we don't manage it, the economy of Tokyo will really die. ..

Actually working in Tokyo, daily sales have deteriorated in every industry, especially accommodation facilities such as hotels are already in a state of destruction, and even some "major hotel series that everyone knows" is about to go bankrupt. I often hear that they are talking about a crisis or whether they should close some of the hotels they operate, so I really want the Olympic Games.

And Tokyo is from today

In addition, the analysis results of 325 people who died of COVID-19 by the end of June in Tokyo were also shown.

The average age of the dead was 79.3 years old, and most of them had underlying diseases such as diabetes, high blood pressure, and kidney disease.

In addition, the ratio by age of those who die of being infected with COVID-19 is as follows.

In this way, statistical analysis shows that the new corona should never be passed on to elderly people.

there is an analysis that 30% of people in their 80s or older will die if they get COVID-19, and I really want young people living in their parents' houses to be careful...

↑ (It may be disturbingbut ) it is the summer vacation season / Obon season, so please let me put it on for a few days.

In Tokyo, they finally started to operate

"HER-SYS, a system that can manage infected person information"

instead of collecting infected person information by fax from each public health center!

It seems that the patient himself can also input from the smartphone. I hope this will reduce mistakes, speed up detailed presentations, and improve analysis so that pinpoint countermeasures can be taken!

I'm really looking forward to it!

It’s getting hotter, the masks are getting really hot, and I’m really worried about heatstroke.

Let's manage to survive this year and be able to laugh at this time next year!