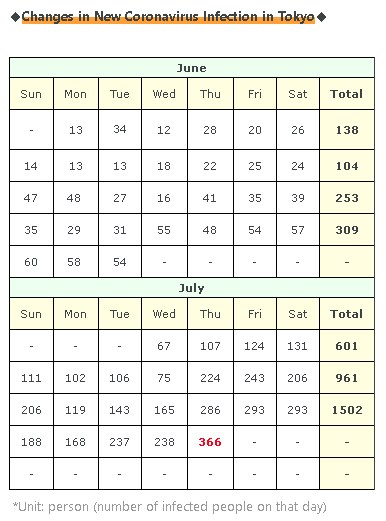 The number of new infections in Tokyo has finally exceeded 300...

Unfortunately, that was what we expected...

I hope it will not increase further tomorrow...

→There are [7] people related to "the entertainment district at night" in the unknown infected route, so the total is [47] people.

(Although I posted it yesterday)

It seems that the number of quarantines at the airport is increasing and inspectors are screaming.

At Narita Airport, the number of inspections exceeded 1000 at the end of June, and the departure flight to Shanghai China was delayed...

As in this news, Japan and Thailand have agreed to allow mutual entry...

When we heard that the government accepted foreign entry, we want to say "Why?"

However, in reality, the number of new infections in Thailand these days is one digit (several) every day, and it seems that those are only those returning from abroad...!!

Rather, Japan has more new infections,

so we have to say "Thank you for mutual admission."

By the way, as a measure for long-term residents such as corporate employees,

it is necessary to carry out PCR test and wait at home for 14 days after entering the country.

If that's the case, it's even more secure.

(Although I also posted it yesterday)

According to the Yomiuri Shimbun's summary of the stage where the mass infection occurred in Shinjuku, infected people are at least 115 people in 11 prefectures.

The situation was about 130 square meters, with about 90 seats, which is about half of the total number of seats of 186, were prepared, and they were playing games in addition to singing and dancing.

Furthermore, from here, the family and workplace of the infected person are infected, and it seems that 115 people are not included, so it became a really enormous outbreak. ..

→Welfare facility in the prefecture [1] person

*a woman in her 50s living in Kawaguchi City

*a man in his 20s living in Saitama City

*a woman in her 40s living in Tokyo

* Cumulative total of 8 students (in the same circle)

→Men in their 80s who received home-visit care [1] person

*3 people who were cared for

→ planned to be examined as concentrated contacts

→A woman in her 60s living in Hadano

who was transported due to abdominal pain [1] person

from the training facility in Hyogo Prefecture.

*Many people have fever after July 14

→"the entertainment district at night" in Chuo-ku, Chiba [6] people

*Cumulative total of 9 (including prizefighters)

In prefectures other than the above, many prefectures, including Shiga, Fukuoka, Hiroshima, Hyogo and Kagoshima etc. have new infections of 10 or more.

I posted on this blog yesterday,

And today was the first consecutive holiday since the "Go To (Travel) Campaign" started.

What was it like today when it actually started?

As you can see in this news, it seems that there are some places with few tourists, but most of the places seem to have more visitors.

It's complicated from the viewpoint of infection prevention,

but just listening to the voices of tourist agency or shopkeeper how long they were waiting for customers to come...

I don't think there is a problem as long as you prevent infection,

so it's a good idea to enjoy as much as possible!

The number of people around Shinjuku station today

decreased by 51.1% compared to the same period last year

decreased by 39.3% compared to the same period last year

Yesterday, there were more puzzling news about the "Go To Campaign" than positive news.

I said yesterday, but

Regarding the number of new infections [366] in Tokyo today, Minister of Economic Rehabilitation Nishimura said that he is "increasing a sense of crisis."

And he said
"Since we will balance infection prevention and socio-economic activities, we naturally come into contact with people, but we would like individuals to take appropriate measures before going out. If you can't do that, I want you to refrain from going out. "

So, to guess from this statement,

He doesn't intend to take any measures yet.

This is the hardest part of all.
No matter how you think, you must already take measures now.

However, I think we can protect ourselves and our important person only by preventing infections that are familiar to us, so let's do our best from a small place.