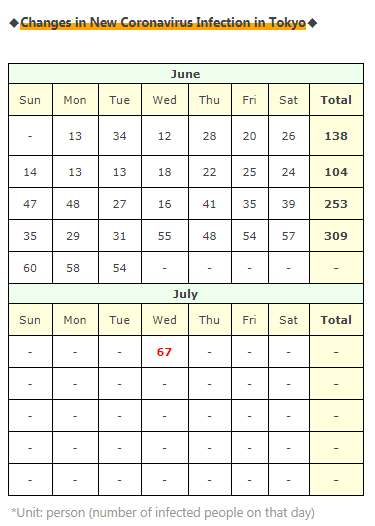 67 (+13 from the day before) new infections confirmed in Tokyo.

The number of new infections in Tokyo has grown considerably today...

It's been every day these days,

but we can't say anything unless I look at the details because there are too many new infections,

so today, I will summarize

the breakdown of the number of new infections in Tokyo + α

as soon as possible!

Out of [67] new infections in Tokyo

・Infection at a dinner with friends and acquaintances [6 people]

The numbers are coming out at a fixed rate again today. ..

The number of "unknown infection routes" is large [20 people]

[27 people] related to "the entertainment district at night"

I wish the goverment would take measures even here...

I think that even an unskilled person,

but I wonder if there is something difficult...

And I am posting it every day ↓

How abnormal this is..

This is a new

issued by the Tokyo Metropolitan Government after declaring an emergency situation,

but as the news began to say, it is already above the number of value of Re-requests for leave.

Recently, the news says thatTokyo prefecture will recreate the "monitoring index" in earnest,

but I would like them to take proper measures instead of loosening the mitigation index.

After all, the monitoring indexes were reviewed,

I will compile the English version of the article as soon as possible.

Today, the number of hospital discharges has exceeded 100 after a long time,

but the increase does not stop...

As for the new monitoring indexes of Tokyo metropolitan area,

no specific numerical guideline is published,

according to what I read, there is an atmosphere that

it seems to be OK if medical care does not collapse even if the number of infected people increases to some extent.

So be very careful when you go out!

I'm really sorry that I've stopped writing translated articles in English for a while.

My work was getting busy after lifted the emergency declaration.

I'll restart from here and update it every day,

so if you have time, please check it out.