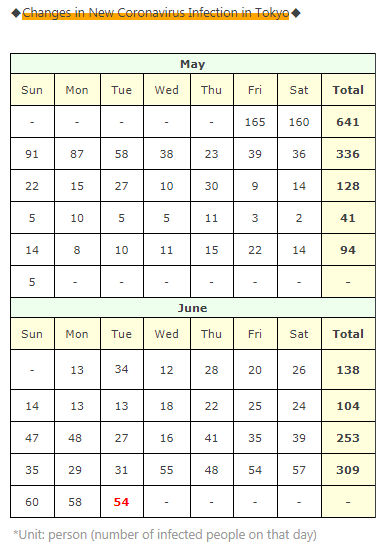 54 (-4 from the day before) new infections confirmed in Tokyo.

The number of new cases of infection in Tokyo has continued to decrease yesterday and today, though only slightly.

Today was quite a lot nationwide.

It's kind of a upset day because there are clusters in various places.

(in Tokyo where I live),

The weather was also rainy and I feels like a disappointing day.

the rainy season is originally a season when colds and the like are prevalent,

So today, I will summarize

the breakdown of the number of new infections in Tokyo + α

as soon as possible!

Out of [54] new infections in Tokyo

・Participate in dinner for 20 people [2] people

Men from India and Pakistan [6] people

Today, the number of "unknown infection routes" was also high at 28 people.

Perhaps there are many people who are really related to "the entertainment district at night" in this,

but considering that, there are still too many "infection route unknown".

I've posted it for the past few days, but I'll post it today just in case. ↓

I've posted it for the past few days, but I'll post it today just in case. ↓

How abnormal this is..

This is a new

issued by the Tokyo Metropolitan Government after declaring an emergency situation,

but as the news began to say, it is already above the number of value of Re-requests for leave.

Recently, the news says thatTokyo prefecture will recreate the "monitoring index" in earnest,

but I would like them to take proper measures instead of loosening the mitigation index.

I'm sorry it's getting longer,

The blog title is "Tokyo",

but the number of infected people was high in some prefectures in Japan today,

so I will summarize the details of other prefectures.

In the entertainment district at night【26】

(people who are rich contacts)

No Cluster (all individual)

No Cluster (all individual)

The number of people who are undergoing medical treatment all over the country was gradually decreasing,

but since it fell below 900 people,

this time it continues to increase and more recently, more than 50 people a day...

As I wrote in the upper part,

it's easy to get sick during the rainy season,

so be very careful when you go out!

I'm really sorry that I've stopped writing translated articles in English for a while.

My work was getting busy after lifted the emergency declaration.

I'll restart from here and update it every day,

so if you have time, please check it out.