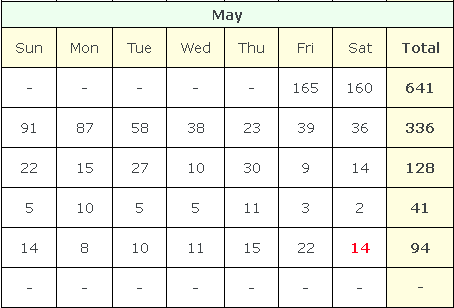 14 (-8 from the day before) new infections confirmed in Tokyo.

The number of new infections in Tokyo has finally decreased today ...!

“What if It keeps increasing this way?"

I thought that, so it was good for the time being!

it should be noted that today may be a little out of sight even on Saturday...

(Because in Japan, the number of  infected people on Saturday is small...)

It was said that Tokyo will move to Step 2 from the beginning of next week,

so I was relieved that the number of new infections had calmed down a little before that!

I just uploaded a little summary of "Move to Step 2 on June 1st" so I will post it, so please check it if you like! ↓

it is easy to understand if you look at the "Calendar of New Infections in Tokyo" at the bottom,

but compared to last week,

this week the number of new infections is more than doubled...

we still must be careful.

Breakdown of the number of new infected people [14 people] in Tokyo today,

Of these, [7] were hospitalized infections in Koganei City,

which is a hot topic every day.

* Among them, [3 people] in their twenties

are involved in restaurants with entertainment.

The article said that...

So I wonder if downtown is a big infection route...

I don't want them to issue a self-restraint request or an emergency declaration, though..

And this is a trial calculation of how many people in Japan are actually receiving medical treatment!

Those who are receiving medical treatment nationwide are steadily decreasing!

At that time, I think the infection had begun to settle down,

so the number of people discharged from hospitals is likely to be gradual.

I was really surprised because there were so many people in Tokyo today,

the first Saturday after the declaration of emergency was lifted!

Really when you go out!