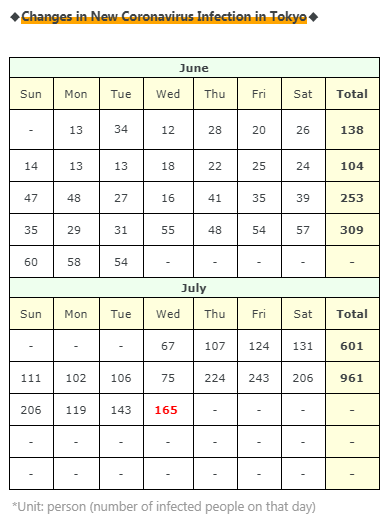 165 (+22 from the day before) new infections confirmed in Tokyo.

The number of new infections in Tokyo is gradually increasing,

I have a bad feeling...because it may be increase again...

* Cumulative [2] in the workplace

→The daughter of a couple in their thirties

→"lilac Nursery School" in Kawasaki City
* Female students in their twenties
* She trains from July 6th to 13th, and she had a slight fever on the 11th, but on the next day she had a cold, so she will practice as usual.

→Children in their 40s with confirmed infection [3] people

Today is the same with Tokyo, but it was a day when there was little information on each prefecture in Japan...

I haven't been able to put it together lately today, so I have only two news items that I was interested in today.

First one is here that,

"Go To Travel Campaign" will be held as scheduled, said Japan Tourism Agency Secretary Hiroshi Tabata, who emphasized in a press conference.

When the infection spreads in the business, "I do not have a measures at the moment" as to whether it is supposed to stop acceptance by each local government...

They are not thinking..

The number of hospital discharges is increasing,

but the number of new infections is too large to stop the increase...

I am worried because the number of severely ill people is increasing at a stretch today, which is 5 people. ..

the details of "group infection at stage performances in Shinjuku" that are finally revealed the day before yesterday,

(The venue of the stage is "Shinjuku Theater Moliere"

/ the stage name is "THE★JINRO-Who is the handsome wolf idol!-".)

people who have been infected in a mass at that place have been confirmed in various prefectures such as Saitama and Chiba. ..

All viewers [800] were designated as rich contacts...

It's scary because it seems to increase...

According to that article,

it was the news about Kabuki actor Shoryoku Onoe, the fourth generation, who was angry about this matter.

Later he was regretted about his language, but he was positive about what was said, and the general comments to it were also generally positive.

In summary that article is that,

"The organizer knew that there were performers who were in poor physical  condition, but they forced the performance and risked the important customers who came to see it.

These guys are always amateurs, absolutely not professional, from the theater side to the organizers, performers and staff."

"(Toward the resumption of theaters at the government's easing step)

The professionals in all the stage industry are bleeding, crying, being patient.

If the resumption have come to a stop, how do you take responsibility?"

It is natural that he can't help getting angry. Of course, not to mention me, I think that (also me, but) you may get tired of the fact that the number of infected people does not stop increasing and that the government do not take much measures.

I really think from the bottom of my heart, but I would like to conclude it with the power of everyone with good sense.