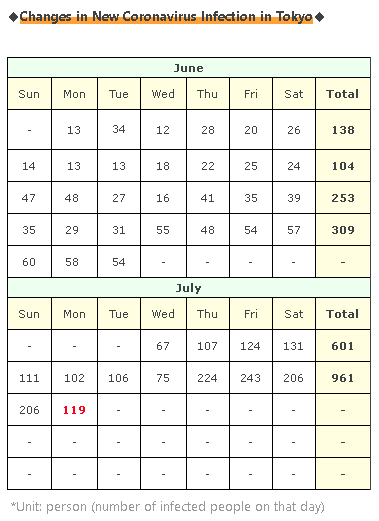 119 (-86 from the day before) new infections confirmed in Tokyo.

The number of new infections in Tokyo has dropped sharply today!

Still considering "convergence"[100] people is too many,

But I am very happy that the number has decreased so much.

I hope it will continue to decrease tomorrow.

Men and women from Pakistani and Filipino etc. [13] people

→ →There is currently no information about other outbreaks.

→Acquaintance of an employee of a cabaret store in Koshigaya [1]

→ There was no information on outbreaks,

most of which were individual or domestic infections.

→ A cluster guest [1] person at a stage appreciation that occurred at [Shinjuku Theater Moliere] in Shinjuku-ku, Tokyo

It is a quote from the summary article yesterday,

So I'm glad that the number of new infections in Tokyo has decreased even more today.

And today there was another press conference by Minister Nishimura on the 13th, Since the "Go To Campaign" has begun and it is expected that there will be more movements across prefectures,

And today, the details of "group infection at stage performances in Shinjuku" are finally revealed.

The venue of the stage is

and the stage name is

"THE★JINRO-Who is the handsome wolf idol!-".

all the viewers [800] people were designated as rich contacts.

By the 12th, infections of casts, staff, and spectators were known,

and it is said that the cumulative total is [16] people at the moment.

They are currently calling out to those who have seen it.

I am worried that it will increase dramatically from now on...

No matter what, the number of people reached 3000 at a stretch.

The news is good and bad today, many of statements and press conferences by Minister Nishimura's economic revitalization, but Mr. Nishimura has finally taken the stance of taking measures.