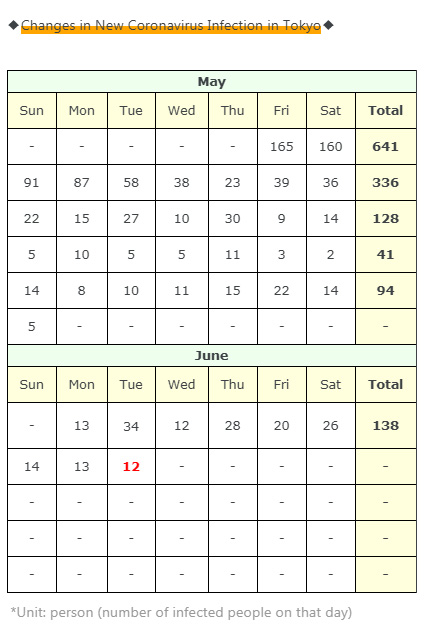 12 (-1 from the day before) new infections confirmed in Tokyo.

The number of new infections in Tokyo has finally stabilized below 20.

If I want to, I want it to decrease a little and become a single digit...

I put ( ) in the "Number of people infected nationwide",

because "15 foreigners were positive in the quarantine at Narita Airport" was included!

In the first place,

I think that they sholdn't count it as the number of domestic infected people...

there are [15] people who were positive in quarantine at Narita Airport,

the details are that,

→Activity history in Peru and Mexico

・All of them are the people who are subclinical infection

When they say that they live in Japan and are foreign nationals,

it means that you lived in Japan and returned to their home country...

I summarized it ago,

but it was a bit scary because Japan was considering relaxation of entry restrictions for foreigners and news at the end of last month.

Here is a summary of examination of relaxation of immigration restrictions ↓

I want Japan to quickly return to complete daily life...

today's breakdown of the number of new infections in Tokyo came out.

So I will summarize it.

Out of [13] new infections in Tokyo

・Today, there is no infected people in "the entertainment district at night."

(They can't control it, but)

Don't pass on the virus to your grandma...

I can't expect much from the government and local governments to take measures against the "night downtown", so I have to pray

because in Japan, there are many new infected people in the entertainment district at night every day.

Since it is summarized, please take a look if it is good ↓

"It seems that the government and Tokyo will discuss the measures, so expect it!"

but it seems that the result was disappointing.

Everyone, please be careful not to infect...

I hope the number of new infections in Tokyo will be also small tomorrow...