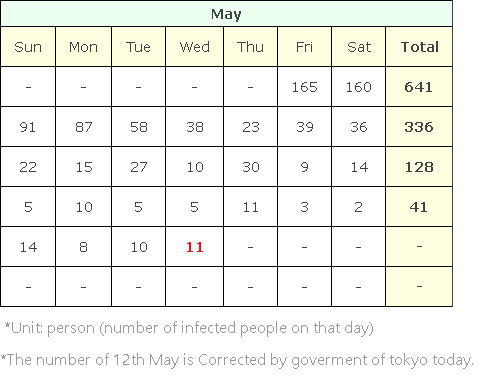 11 (+1 from the day before) new infections confirmed in Tokyo.

It's hard to cut 10 people that the number of new infections in Tokyo...

Now that the declaration of emergency has been lifted,

I can rest assured if the number will be a little smaller.

Tokyo has a standard of "the number of new infections per day is 20 or less",

so even in the news,

" because it is 20 people or less, today was also small numbers".

And the number of people whose infection route was unknown was [8].

I am a little scared about that 8 out of 11 people are unknown route of infection...

Also,the age group of infected people is in their 10s to 90s.

* If you are concerned about the standard of the number of infected people in Tokyo, click here ↓

* Click here to see how it will be mitigated by the standard number. ↓

I calculated how many people in Japan are actually receiving medical treatment!

The number of people receiving medical treatment in Japan is steadily decreasing!

but when I got on the train before noon,

the number of people had already increased..

Around 70 to 80% of people were returning comered to normal times.

I think that the number of people will gradually increase in the city after the emergency declaration is lifted,

*The number of 12th May is Corrected by goverment of tokyo today.