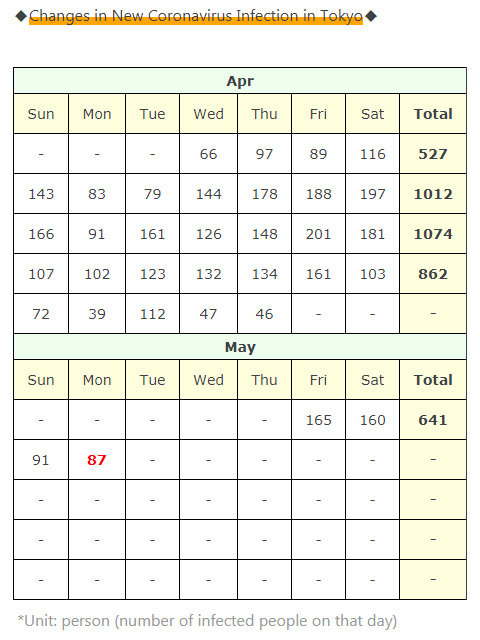 87 (-4 from the day before) new infections confirmed in Tokyo.

While the number of new infections in Tokyo remained at double digits,

it decreased slightly compared to the previous day,

but it increased suddenly compared to the previous week. .

And the number of deaths in the world

has been declining for the past two days.

That's less than half that number. Did they get any results?

It's a continuous holiday, so I'm afraid that people feel relaxed. .

Seems tomorrow there will be a decision to extend the emergency declaration.

Since the number of inspections announced by Tokyo has stopped since April 30,

so I can't say anything because I don't know whether there are a lot of inspections or not.

After all, the emergency declaration has been extended.

It's a shame in itself, but since I knew that the numbers announced were heading toward convergence,

Let's put up with everyone a little more and end this cramped day as soon as possible!