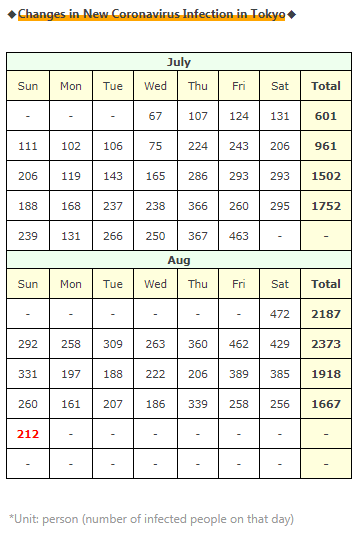 Even though Friday (258 people) and Saturday (256 people) are considerably fewer days than the previous week, the number of new infections in Tokyo did not decrease today than I expected...

・Infection at a dinner with friends and acquaintances [2] people

・Infection in the facility [11] people

・A person in charge of the city says, "Especially elderly people have a lot of infections at home." ...

Adjusting for "hospitalization or hotel or home treatment" ： 706 ( -8)

→Men and women from India, Ukraine and Vietnam [7] people

*Men in their 40s in Kasukabe City

*A male in his 20s living in Hiratsuka City

→US military base：[3] people

As mentioned in each prefecture above, the deadline for "prefecture's own emergency declaration" and "request for shortening business hours" has come up every day, but tomorrow will come in Aichi.

Regarding this, Governor Omura of Aichi Prefecture has decided to cancel both the emergency declaration and the shortening of business hours on 24th tomorrow as scheduled.

It is said that the reason for the decision to cancel is that the maximum number of infected people was 193 on July 31, but the number has been below 100 for 8 consecutive days.

Certainly, if people remain in the state of emergency declaration, they will not be able to live economically ...

However, if they forcibly declare an emergency, it may be possible to cancel it after it has controled a little more completely.

It's a really difficult problem, and infectious diseases are also difficult. ..

And it seems that hospitals tend to refrain from visiting because of fear of infection.

It seems that the average is about 20% less than usual, and the government seems to be considering management support for medical institutions.

Certainly, I am also refraining from a dentist for a while ... lol

"Well, when their customers were decasing only 20% they can get provision of management support ...But Tokyo's tourism industry, especially the lodging industry, is said that the occupancy rate is 10% (down 90%!)... "

Certainly medical institutions are absolutely necessary in our life, so it is not same but...

And today I have another topic!

It seems that the record of the government expert meeting is disclosed in almost black and it is a problem.

Probably you said "What do you mean?". That's right. 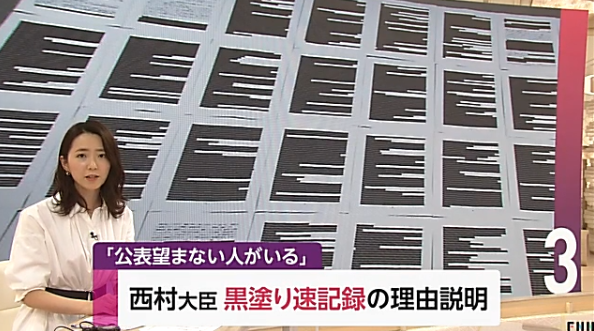 All the black parts of this background are painted in black...
This is because the experts who are participating in the expert conference do not want to publish their remarks.

In the comment section of the news and the reaction of the internet-people, most of the opinions were

``If you do not want to announce your remarks, you don't have to attend the meeting'',

but the conclusions that have all been summarized have been firmly announced, and it is properly used for COID-19 measures I personally think that it is not necessary to publish it separately if it is done...

Rather, I think it would be more problematic for the meeting to be meaningless if only the opinions that sounds good for public people are given even though it will be announced.

It's decreasing so much that I don't know how many cosecutive days it has decreased!

Today, it seems that the contents are too serious, so I'm worried about that...

It seems that the number of people is increasing in the downtown area at night...

I want to say to them,