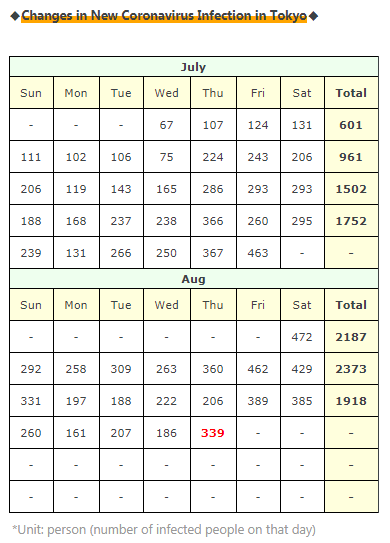 The number of new infections in Tokyo has increased today's Thursday.

I wasn't surprised because I expected it to increase to some extent,

・Infection at a dinner with friends and acquaintances [7] people

・Infection in the facility [11] people

・Infection via other routes [27] people

・Today, a breakdown by age of "32 seriously injured people" (as of Aug 19) in Tokyo was released.

→Men and women from the Philippines and India [8] people

→Female employee in the 40s of

*Restarted classes on 17th, but will be closed for the time being

→If the hospitals deal with COVID-19 measures by reducing the number of beds around infected patients, the government of Chiba prefecture will subsidize "16,000 yen to 52,000 yen per bed per day" using the national subsidy. .
*I hope this does not result in rejection of the patient...

・[4] people (There are no reports from the U.S. Army today on bases and affiliations)

*Fukuoka Prefecture will provide 50,000 yen (100,000 yen for multiple store management) to restaurants that are taking measures against COVID-19

This is the image I posted in the summary article yesterday, but ↓ 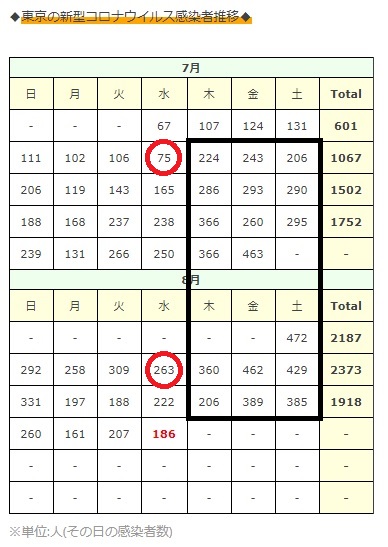 Wednesday: Almost the same as Tuesday or a little less

Friday: Number of people infected with MAX in a week

That's the flow of one week.

I don't have to say because you already know that, right? (Lol)

Let's think about 339 people today, and I'm a little scared of what happens tomorrow's "Friday: MAX number in a week"...

By the way, in some news today, some expert teachers said,

"The second wave of the new corona may be now at its peak."

Shigeru Omi, chairman of the government's subcommittee for the control of COVID-19 infectious diseases, says,

"Our prediction is that we have reached a peak in Japan."

Kazuhiro Tateda, President of the Japanese Society of Infectious Diseases, said in his lecture that

it is currently in the midst of the second wave,

and that "it looks like it has exceeded its peak."

"The number of new positives may have really dropped, but it may have been due to a small number of tests because it was during the holidays."

"Results are seen after 10 days to 2 weeks, so about infection, we must carefully judge whether the number of people is decreasing.

*By the way, the content of the monitoring meeting is just as usual, "It is in the stage of ○ now" and there was not much meaningful information, so I don't not summarize it in particular...

As a matter of fact, there is no one thing if we don't be careful of, so we have no choice but to take measures and prevent everyone together!

I hope COVID-19 is really starting to decrease...

It seems that masks and alcohol disinfection products that are currently prohibited from resale will be lifted on 29th and will be able to resell...

Because the supply is sufficient and the price is not soaring, they said.

But isn't it necessary to rush to release the regulation?

I'm afraid it will be hard to obtain again just in case...

Somehow the government is too quick! There are many things like that.

Even if the self-restraint request is lifted or this restriction is lifted...

I can't really laugh because that judgment seems to have failed. ..

In addition, related that,

The person who was arrested for reselling alcohol disinfectant at double the price was on the news today even though it was forbidden to resell! There are still people who buy double price like this. .. ..

Now, the problem is the number of people infected tomorrow Friday!

I wrote it yesterday, but it seems that quite a few people voluntarily refrained from moving in Obon, so I think the infection did not spread by that amount...

I hope COVID-19 will gradually been controled!