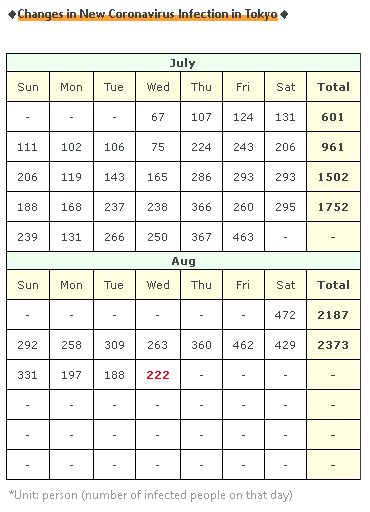 222 (+34 from the day before) new infections confirmed in Tokyo.

The number of new infections in Tokyo has gradually increased...

Since the number of new infections this week is gradual, I hope this week will end with a small number...

The things to watch out for are Thursday, Friday and Saturday from tomorrow.

・Infection at a dinner with friends and acquaintances [17] people

*Men in their 20s who attended the conference

*In this conference, 1 person has already confirmed infection

→Mass infections of a nursing home in Sagamihara City [1] person

*Female employee in her 50s

→Mass infections of a municipal elementary school in Atsugi [3] people

*Medical staff in their 40s

*Probably only one person is infected at this clinic now

・Camp Courtney and Kadena base [3] people

There was such news today.

It seems that clusters have apparently occurred from the shop where the "Infection Prevention Thorough Declaration Sticker" was attached. ..

The store information is below.

It is said that 7 people have been infected by 11th.

Somehow I knew it, but the "Infection Prevention Thorough Declaration Sticker" doesn't mean anything at all. ..

Not only in Tokyo, but also in many prefectures, the Governor has pushed it quite strongly, but this "Infection Prevention Thorough Declaration Sticker" is recommended by the governor of that prefecture, so if they put it on the shop, we feel safe of entering.

And when I looked up this "Infection Prevention Thorough Declaration Sticker" some surprising facts came out!

Actually, this "infection prevention thorough declaration sticker" is not a method that a person in charge of the city or public health center visits and checks and issues it if infection countermeasures are perfect,

You can print the sticker by yourself by visiting the homepage, checking the infection countermeasure items, and entering them...!

The general citizens of each prefecture are doing their best to refrain from doing so,

Today I have 3 articles about changes in life related to COVID-19, so I will summarize it.

When NHK called a home phone number/mobile phone number randomly generated by a computer and took a survey, the changes in income due to the influence of COVID-19 are as follows.

Decrease  －  2%
…In the first place, those who have a home phone or those who receive a call from an unknown number on a mobile phone are people who have a fairly solid work,

so almost people said "no  change" by such questionnaire.

So what about the reality?

And in relation to it

According to the ILO=International Labor Period survey on youth income, the changes of youth who are employed in jobs around the world are as follows.

Youth who lost their jobs completely ー 17%

Maybe Japan is the same, but young people are the most affected. .

it is a difficult place because it is young in the data that the infection is spreading. .. ..

Further on the economy...

Although it is not in Japan but in the United States, America is the country with the highest number of people infected with the new corona in the world, but it is said that luxury cruisers (selling 6 billion yen!?) are selling like hotcakes ...

Apparently, it is popular with wealthy people because it is a safe place (against COVID-19).

Certainly only a limited number of people can carry it, and then it will be as safe as at home.

However, the scale is different (laughs)

↑ At the bottom, "Time of disappearance of COVID-19 in each material", but it seems that there are many people who do not know it yet. ..

I was surprised when an acquaintance told me today that "Corona is okay in four or five hours"...

That's not the case!

Depending on the material, COVID-19 may continue to live for several days, so please be sure to obtain the correct information and be careful!

And tell the people around you...

There are less than 40 people, but it has decreased!

It has decreased for the second consecutive day!

I hope this continues...

The number of infected people has decreased throughout Tokyo today!

It's been decreasing for two consecutive days!

It would be nice if it could be gradually reduced as it is!

However, what I'm worried about (I'll try to put it together when I have much time) is that the number of severely ill and fatal people nationwide has risen to five or more every day in the last few weeks since the spread of the infection...

It would be good if the administration people are aware of this and take appropriate measures.