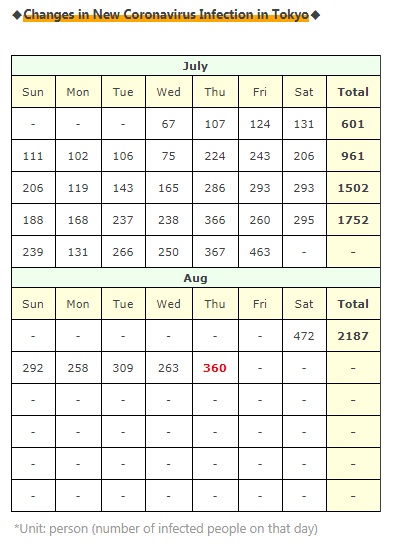 360 (+97 from the day before) new infections confirmed in Tokyo.

The number of new infections in Tokyo was almost the same (360) today as last Thursday (366) when it was the week that the maximum number of infections was nearly 500.

but what will happen this week?

Tomorrow and day after tomorrow is too scary...

・Infection at a dinner with friends and acquaintances [34] people

・Infection within the facility [4] persons

・Infection from "other" rich contacts [27] people

・Infection case at a party held in a share house

→ Infectious diseases at the drinking party at home like the above 2 cases,

*Female employees in their 50s of clerical staff

*No opportunity to interact with the outside

→Live house with a mass outbreak in Sapporo [1] person

→A boy in a nursery school in Sagamihara City [1] person

*Several dozens of kindergarten and staff members are rich contacts

*2 staff members have already confirmed infection at this facility

*Men in their 60s in Kisarazu City

*3 people have already confirmed infection at this facility

→Asymptomatic women in their 30s in Kashiwa City [1] person

Here is what I would like to pay attention to in the above summary.

→Asymptomatic women in their 30s in Kashiwa City [1] person

The attitude of voluntarily undergoing an inspection before returning home is too great...

Unfortunately, she seems to have been infected, but it would be nice if anyone could feel free to carry out the test with a "feeling of casual stop by" because of the improved medical system and test system.

Then, people can come and go with peace of mind by being able to inspect before traveling or traveling across prefectures.

there is an outbreaks in the Takarazuka Revue Company, and 7 people are confirmed the infection was today.

A total of 11 people, including 8 Takaragennes and 3 performance staff who have appeared at the same performance by Hanagumi, have been confirmed to be infected...

Infection does not stop in various places...

Especially Takarazuka has many fans, and I hope it will not spread any more. ..

It seems that there was a monitoring conference in Tokyo today.

I will summarize the findings of this monitoring meeting.

・Rate of infected persons by age (one week until August 3)

・infection route (one week until August 4)

・Restaurant with entertainment at night 19.3%

・The highest number of infections was in Shinjuku Ward at 13.9%, but in other areas the infection spreads evenly.

・Although the number of hospitalizations such as middle-aged and elderly who are at risk of seriousness is increasing, beds for the seriously ill are still secured, and the situation is ”still in the second stage out of the four stages".

・In order to prevent overwhelming hospitals, patients who have a low risk of becoming seriously hospitalized by a doctor should be treated at the hotel or at home.

However, considering the fact that people in their 20s account for more than 40% of the total number of infected people, their daily behavior will determine whether or not they will be infected. ..

Of course, I know most of the people in their 20s are careful about preventing infection...

…But today before that…!

By the way, in the comment section of Yahoo! News,

"I don't know if it works, but better than no vaccine"

"I don't even know if there are any side effects."

"I want a domestic vaccine..."

No one understands this vaccine is amazing!

I wanted to say!

If you have read this summary article, you already know, right? lol

I'm really looking forward to it!

Then it is a summary of the vaccine ↓

It's really right in front of clinical trials in Japan this month! I'm too happy to cry. .. ..

I summarized various things today, but what I wanted to summarize the most is that it was decided that Japan will be supplied with vaccines of AstraZeneca and Oxford University!

I'm really hoping that I can get the vaccine next September or October!

Until then, everyone is in a difficult time, but let's all survive!