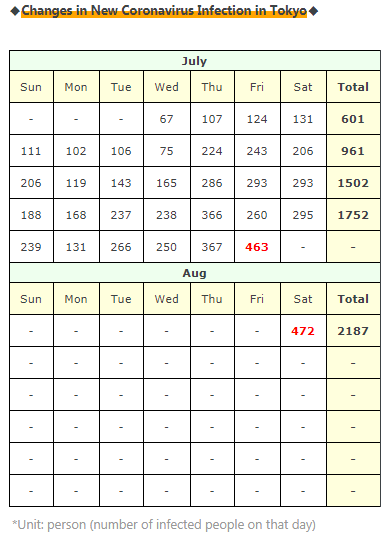 ■■■■ Also Today, the highest number of infected people ever… ■■■

472 (+9 from the day before) new infections confirmed in Tokyo.

Other prefectures are already quicker to respond and take countermeasures, and have issued their own emergency declarations such as Okinawa.

Set it aside whether or not it is good or bad to declare of the emergency ,  but It's strange that Tokyo has almost no countermeasures even if it exceeds 300 or 400 of infected people like this week.

・Infection at a dinner with friends and acquaintances [22] people

→ Men and women from Thailand and Peru etc. [5] people

It's really scary that there are more than 300 people with "Unknown infection routes".

It's not strange to be anywhere in town.

*He broke the lock and escaped from the hospital despite a COVID-19 patient. And moved to everywhere in Saitama prefecture.

→Colleagues and family members with outbreaks

within the company in Yokohama City [4] people

→Family and relatives of women in their 40s

who have been confirmed infected [5] people

where they can enjoy "lunch karaoke" [6] people

with colleagues in Kashiwa City [5] people

*The company has a meal for 11 people

(1 person has been confirmed to be infected outside the prefecture)

As I wrote yesterday, there are more than 100 infected people not only in Osaka and Nagoya but also in Fukuoka,

Although the population should be large (in Saitama, Kanagawa and Chiba), the number of infected people has not increased to that level.

At least 100 people are not exceeded.

It's been true here for a long time, but this is strange...

Well, considering Kanagawa, Saitama, and Chiba, it's really good that there aren't more than 100 people (although there are many infected people).

The first one is here

It wasn't about Tokyo from the beginning, but Okinawa's own emergency declaration was issued yesterday.

The reaction of the local people is as follows.

"The last time of emergency declaration, I was in a rush to resume work, this time it's expanding the infection, so I refrain from going out."

"We cannot stop spreading infection much now. We are considering re-closing to protect ourselves."

"I wish there is no Go To Travel campaign..."

"Because there was no "Go To~" and only travel within the prefecture, infections did not increase."

"This emergency declaration is unavoidable, the governor is correct"

It seems that the hospital bed utilization rate in Okinawa has already exceeded 100%.

It seems that you are giving priority to the seriously ill

This is a state close to "medical collapse". ..

While telling about the current situation in Okinawa, I wrote in the article as a reminder that this will happen if Tokyo exceeds the tolerance of infection.

Even so, each prefecture was suddenly inclined to make its own emergency declaration.

And this time, the target was really pinpointed to the restaurants that provide alcoholic beverages and "the entertainment district at night".

I think this is really good.

However, I want them to take another step or measures because I feel like it's lacking something yet.

I think this is probably because I see Shinjuku and Shibuya at night every day,

but in Shinjuku and Shibuya at night, many young people were outside until 2 or 3 o'clock in the night and drinking and walking up to that time. And also there are other adults  outside in midnight...

I really feel that they have to be self-restraint "only" few weeks to converge COVID-19, so if they don't put up with it for a little while, the infection probably won't stop.

"Infectious diseases" and "viruses" are really difficult to control...

(I realize that myself.)

The second one is here.

Kabukiza has been restarted!

It's irresistible to fans!

Measures such as reducing the number of seats to less than half when restarting the performance etc.

it seem to be sufficient about measures.

Since it is a Japanese traditional performing art, I think that they are really paying close attention to the prevention of infection, so I hope that they can perform well and become a model for the event!

The third is here.

"(Regarding domestic infection status) The number of infected people remains high. I would like to continue to carefully analyze and hear the opinions of experts."

"We would like to strengthen measures that focus on areas and industries, and reduce COVID-19 by payment the amount of support money to companies that cooperate with us. I want to support as well."

It's enough to listening to the opinions of experts, so take some measures...

However, it is possible that neither the Tokyo Metropolitan Government nor the government has taken proper measures, and it has spread to all parts of the country.

In relation to this yesterday,

As for vaccine coverage in the United States,

"It's not a dream, it's a real prospect to be completed at the end of this year or early next year."

In the US, the NIH = National Institute of Health and the pharmaceutical company "Moderna" have started the final clinical trial of the vaccine under development on July 27.

Since today is Saturday,

in "COVID-19 Trend Calendar in Tokyo"

which is always summarized at the bottom,

the total number of infected people for the week was given.

A little more increase than I expected.

I hope next week will not increase dramatically on a weekly basis...

However, todal number of this week is about 3 or 4 times of few weeks before, so when I think about it that's a shame...

Despite the highest number of people infected in Tokyo today, coverage was less than I expected.

I hope that everyone's senses have not become numb because of the number of infected people has increased too much.

And 10,000 yen per day is too cheap to business suspension request, right?

If they really want to stop the infection, they must put out the amount that people are satisfied with.

I hope that they can devise countermeasures and eventually control COVID-19.

Until then, be careful to prevent infection.