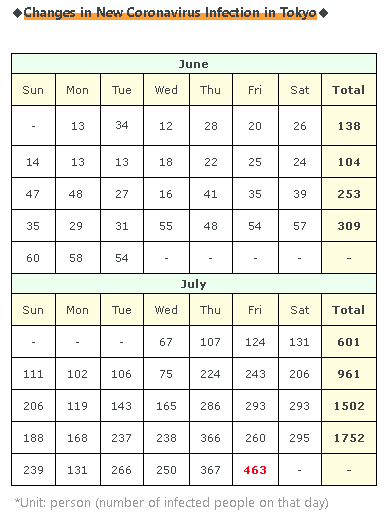 463 (+96 from the day before) new infections confirmed in Tokyo.

As expected, the number of new infections in Tokyo is close to 500 instead of 400...

However... honestly, I expected to reach the latter half of the 400, so I feel a little surprised in the opposite sense.

Even I, an ordinary person, thought so, so I think many of us would have predicted the same.

We couldn't prevent it because the govenment of Japan and Tokyo had no idea and no measures...

*There was no announcement today.

*Including those with unknown routes of infection, there are 75 people.

・Infection at a dinner with friends and acquaintances [16] people

*In some cases, more than 20 performers and staff who were practicing the theater were infected.

・Today, all public health centers except the islands have been notified of the outbreak.

→ Men and women from England [5] people

I can't say anything about the breakdown of the number of people infected with nearly 500 people today...

*Male teacher in his 30s

*Infection protection in the hospital was sufficient, so the causal relationship with infection is unknown

*16 people scheduled to be inspected

*Rich contacts of the two nurses at the Funabashi Municipal Medical Center were all negative contacts, and the examination at this medical institution was completed.

It is strange that

Does it mean that the risk of infection is higher when people are concentrated in some cities in local...?

(For example, in Aichi, everyone would go to Nagoya City...)

Before today's topic, let me summarize some of the articles that interest me.

The first one is here

It is the result of scientific verification of the alleged "even though actually dead related to the new corona, but they are hidden in Japan".

By April of this year, the number of deaths is almost the same as usual.It seems that the statistical conclusion is that there are few deaths due to the missed COVID-19.

In addition, it is said that analysis will be continued after May.

The second one is here.

"It is a very critical situation where an infection explosion is also a concern."

Aslo she called on July 30 as follows.

①Calling for self-restraint for dinner with food and drink

③Obligation for businesses to comply with infection prevention guidelines

④It is obligatory for Tokyo residents to use stores with stickers to prevent the spread of infection.

She thinks that COVID-19 infections will last for a long time,

so she wants to stop the spread of infections by simultaneously implementing these multiple measures.

Countermeasures... are you talking about these ① to ④?

Most of these are not countermeasures, isn't it?

The third is here.

Resale of masks and alcohol products is currently regulated, but it will be lifted soon.

Is there a meaning to lifted it...?

And when this infection is spreading...?

It seems that Minister of Health, Labor and Welfare Kato said,

"The reason is that the supply has increased."...

Now, let's return to the topic of Tokyo...

Governor Koike seems to have made the following statement regarding the number of new infections reached 463, which is the highest number ever recorded.

”If the situation gets worse, we will have to think about issuing an emergency declaration unique to the city.”

In addition, regarding the number of new infections being the highest so far,

①The number of infection confirmations tends to increase on weekends

②Inspections are being carried out with a force approaching 6000

Also, it seems that nearly 150 people have been reported by the public health center in Shinjuku.

Regarding the emergency declaration unique to Tokyo, she spoke as follows.

"I want to do pinpoints in which industry and region, etc."

"It's a little different that a business suspension request halts the entire economy."

Also, I wrote it here yesterday, but as a countermeasure, they were again called for a request for "shortening business hours" (5 am to 10 pm) for restaurants and karaoke shops that provide alcoholic beverages in Tokyo.

The company who responds to the request will receive a 200,000 yen cooperation fee.

However, I think that it is the shops that do not comply with the emergency declaration and the business suspension request, and the people who can not stop walking at night,

so it is actually spreading the infection when the emergency declaration is issued, so how do they do that? Is it important to look around and hold down.

However, I think that even if the emergency declaration is issued, restaurants which do not comply it or people who hang out with their friends at night are actually spreading the infection.

So, it is important to patrol the downtown at night and quell the infection.

In relation to this today,

Although it is a request for shortening the business hours in Tokyo, there are still companies that are thinking of continuing to operate normally as usual.

The president of the company said

"I will not accept the request from Tokyo. In the food and beverage industry, many stores are closed and the economic impact is more serious."

It's also true that if a company collapses, it makes no sense...

I can't help thinking wissing the Tokyo metropolitan government and the Japanese government had taken even better measures.