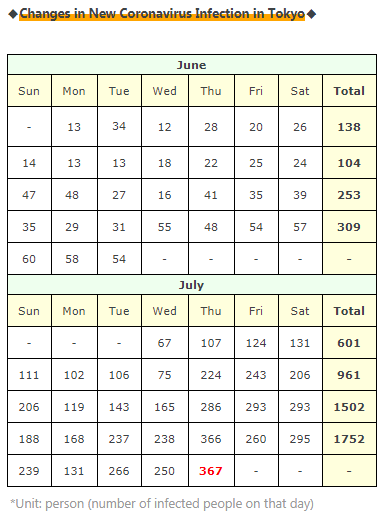 The number of new infections in Tokyo has reached a record high of 367...

However... honestly, I expected to reach the latter half of the 400, so I feel a little surprised in the opposite sense.

For the time being, I have to be alert for tomorrow's Friday

→0 people today have been found to be infected by an inspection of Shinjuku Ward where people related to there are often tested.

*Unknown via other areas or public health centers

・Infection at a dinner with friends and acquaintances [17] people

・Infection in the facility [6人]

*All public health centers in Tokyo have reported the infection.

→ Men and women from Indonesia or Lithuania [8] people

"Unknown infection route" has reached the 50% level for the first time in a while.

This is probably a state of "expansion to other generations" rather than "reduction of infection in 20s and 30s"...

*Female employees in their 50s

*Meal with about 10 people including colleagues who have confirmed infection

*Kanagawa Prefecture's information today did not have much outbreak information, and there were many family infections and workplace infections.

→Childcare teacher in her 20s in Urayasu [1] person

Today, 49 people in Okinawa are in a state where the spread of infection has started,

Tottori had almost no infected person with Iwate until recently, but the infection has not stopped for the past few days. ..

I posted this article few days ago,

Related to this, there was something like this in a YahooNews article today.

when they interviewed one of the owners of the host club in Kabukicho, he said,

"The police take care of our problems. So it is natural to cooperate with them when they have it."

"To tell you the truth, no restaurant around here can obey perfectly if the strict law is strictly enforced, so police can smash the entertainment restaurant at night whenever they want. So it's okay to enter for COVID-19."

“Originally, the night business hours for "the entertainment district at night" are until 25:00, but there are many entertainment restaurants that do not obey, which causes infections. So it's good for the police to work."

It is said that the entertainment restaurant that is observing the closing time of 25:00 properly adheres to the rules even when serving customers and wears face guards and masks, so it is safe for those who have such awareness.

On the other hand, this is a cutout of Yahoo!'s top news around noon, but ↓ 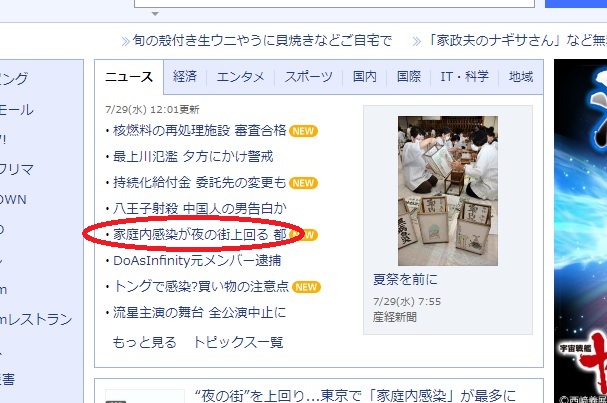 "The number of Infections at home are now more than "night downtown" infections."

It's true that these numbers are true recently, and in the comment section of this article, there were many comments that "it is natural that household infections increase."

But I think that,

"The first time they spread the infection, spread it throughout Tokyo, and to a certain extent, the infection ended in the night downtown, so it's only a small number these days."

Even so, it seems that there are dozens of infected people every day, so I still need to be careful.

I have some information today.

The first one is here.

It had been a hot topic a while ago,

but it is said that they started saliva antigen testing for COVID-19 test at the airport.

It seems that until now the results of the PCR test were known, it was a mechanism to stay at the hotel around the airport for two nights, but this saliva test does not change the accuracy from the PCR test, and it seems that the result will be obtained in one hour.

It is good to think from a preventive point that positive people can be immediately identified and isolated.

And the second one is...

Today, there were talks in some areas as well, but people started to talk about "business suspension request" and "shortening business hours."

for restaurants and karaoke shops that offer alcoholic beverages.

The company who responds to the request will receive a 200,000 yen cooperation fee.

Governor of Koike said that,

"If the situation gets worse, we have no choice but to issue an emergency declaration unique to the prefecture."

Even though SHE spread the infection so far without any countermeasures, however, she also said that there is a possibility of sudden emergency declaration situation unique to the prefecture , every people gets furious.

I don't think people who are particularly affected by the spread of the new Corona infection at work and economically can really laugh. ..

That's true for the college students, too.

Perhaps part-time jobs are probably affected by the decline in income...

It is said that there will be 40032 people Who lost their job from the end of January to July 29 of this year due to the influence of COVID-19.

(I only know it through Hello Work, so how many times is it actually...)

In spite of being fairly generous with employment adjustment subsidies and sustaining benefits for companies, they are actually cut mainly by temporary employees and part-time workers. ..

"Because the company won't collapse"

"If the company collapses, there will be more unemployed people"

It may be said that,

but it is already strange that 40,000 people are unemployed...

The story changes, but it is the third one.

It seems that Tokyo held a monitoring conference for COVID-19 today.

I will list the analysis results of that expert.

①Regarding the spread of infection: judged to be the most serious of the four levels

②When the public health center admitted new positives, it could not find a bed at the regional hospital, and the number of requests for adjustments to the city exceeded 100 each day since the 21st, making adjustments difficult.

③It is difficult to secure a doctor who is resident in the hotel for the treatment of infected patients.

It is time to consider how to safely treat yourself at home.

In particular, (3) recommending home treatment is scary when considering infection prevention... they can go out... Especially asymptomatic people...

The governmet said, "We want to make judgments at an earlier stage, not just at the end because various confusions will occur."

If the number of infections increases dramatically, the confusion becomes even greater...

There were too many things I wanted everyone to know, so I wrote it as it became long, but the negative topic continued today. ..

I'm sorry, the summary article was too long today. ..

It contains important information and information that you should know, so I'd be happy if you read it slowly if possible.

(Even with this, select carefully as little as possible lol)