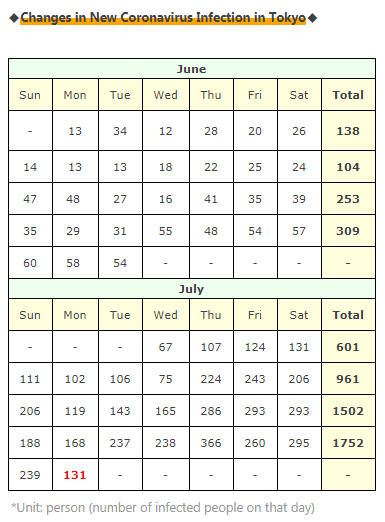 The number of new infections in Tokyo has been around 100 for the first time in a while!

I just want to rejoice, but today is Monday...

It's Monday today with a small number of infected people and Monday is easy to be small number, and also today's is "Monday after four consecutive holidays" instead of just "Monday after Saturday and Sunday"...

So, I think that it's small number of new infection today.

But for the time being, I'm glad It didn't have much today.

*According to a person in charge of the Tokyo metropolitan area, the fact that the number of tests in the Shinjuku area was low during the four consecutive holidays may have been the reason for the low number of infected people.

*At the dinner, four men in their 30s to 50s participated in a drinking party of about 20 people.

*4 infections have already been confirmed at PICU

*A total of 23 doctors and nurses standby at home

*From 24th, new patient acceptance at the Child Rescue Center is suspended for the time being

→ Men and women from Bangladesh and the Philippines [18] people

I think that the number of new infections today has decreased as a result of medical holidays and fewer people going to the hospital during consecutive holidays.

So I'm afraid of the sharp increase in the number of infected people may be announced this Thursday to Saturday...

Of course if it doesn't increase, I'm very happy but...

→A girl under 10 years old in Saitama City - Related

*A total of 99 people with rich contacts, including classes and clubs

*99 people tested negative, but all stayed home for 2 weeks

*One nurse was already confirmed at this hospital

*Checking for other infected persons

→A pharmacist in his 40s living in Tokyo

and working at a hospital in Yokohama [1] person

*They are currently confirming rich contacts.

→"The entertainment district at night" in Chuo-ku, Chiba [1] person

*Female customers in their 20s

*9 employees have already confirmed infection at this restaurant

→Nursing facilities in the prefecture [1] person

*Female nurse in her 50s in Sakura City

→Outbreak is occurring at two restaurants in Hamamatsu City

*18 people are confirmed infection on July 26

→Outbreaks in nursing homes for the elderly [8] people

*Male employees in their 20s confirmed infection on 26th

In prefectures other than the above, many prefectures, including Kyoto, Hyogo and Okinawa etc. have new infections of 10 or more.

The infection has begun to spread in Okinawa...

It's a tourist spot, so there are probably many trips from areas with a high number of infected people such as Tokyo and Kanto, but it is a bit scary when the infection begins to spread on remote islands that are not on land. ..

In addition, in Kyoto, it was announced that one male soldier in his 30s at the U.S. Army Kyouga-Misaki Communication-Station was infected with COVID-19

The route of infection is unknown.

He lived in Kyotango City and visited Hyogo Prefecture on July 12th and Kobe City on July 19th for sightseeing.

it is said that he is the first to be infected at this facility , and from now on they will investigate rich contacts.

In Okinawa and Kanagawa as well, the infection of US soldiers in Japan has begun to become news.

To Change the Subject,

According to NTT Docomo, those who moved during consecutive holidays compared with Golden Week (Consecutive Holidays in May Japan) that was under the emergency declaration is like that!

And  in the areas where movement from Tokyo has increased...

If you look only at the numbers, you think it's "It's increasing...",

but to be honest, during the emergency declaration, almost people had refrained from moving.

(Though an expert teacher also says),

the number of people who are moving is not increasing.

Also the number of people in central Tokyo during consecutive holidays is...

It seems like this was less than usual, and I'm glad that everyone was wary...

And regarding to this, Governor Koike said that

"I said I had to endure 4 consecutive holidays, but I think I spent each while devising. Thank you for your cooperation. "

・It is not the situation to issue an emergency declaration again

(There are few seriously ill persons, and it is not necessary to reduce socioeconomic activities now)

・For the "Go To Travel (Travel) Campaign", we do not currently consider excluding regions other than Tokyo. (related to increase of the number of infection of other prefecture)

And for the "Go To Travel (Travel) Campaign"

・The tourism-related industry is in a very difficult situation.

・Only for facilities that are properly controlling infections, support the accommodation price through the "Go To Travel (Travel) Campaign".

・As a "new style of travel and work style," we will provide Wi-Fi support to hotels, etc. to set up "workation (work-vacation)" that allow them to work by telework while traveling and set up "satellite offices" that are corporate bases in tourist areas...

・Promote attracting luxury hotels by the recovery of foreign demand.

etc., it seems that Mr Suga is thinking about that.

By the way, "Go To Travel (Travel) Campaign" can buy travel products at a discounted price from today!

Perhaps most booking sites, including hotels, will get the discount!

There was too much information to convey because there were many holidays,

and there were too many things to convey...

Personally, it's too scary to write English articles if it gets too long...lol