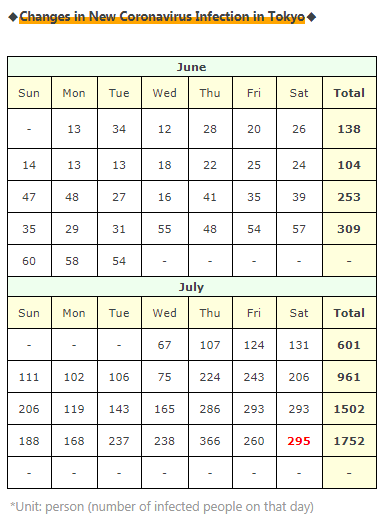 295 (+35 from the day before) new infections confirmed in Tokyo.

Since the day before yesterday, the number of new infections in Tokyo was expected to continue increasing,

but it has managed to stay in the 200 range.

However, it is difficult to judge because it's consecutive holidays also today...

The number of people in the town seems to have decreased a little due to the rain in Tokyo and the fear of "366 people" who had been infected the day before yesterday.

However, Considering that yesterday and today are only few infected people than usual because of it's the consecutive holidays, the number of people infected next week is a bit scary...

I hope that if it return to the number of infected people on weekdays after consecutive holidays, it will not have 500 instead of 400.

・Infection at a dinner with friends and acquaintances [11] people

*Wearing a mask during work, droplet guard sheets in the office and ticket gates

*After July 17, there is no rich contacts because he was staying home

*Wearing a mask during work

*After July 17, there is no rich contacts because he was staying home

→ Men and women from the Philippines and Mexico [11] people

In the quarantine at the airport, the days when 10 or more positive people are confirmed has increased.

Also today, I will summarize some prefectures that have a high number of infected people, not just in the Tokyo area.

* He attends a nursery school in the city where a nursery teacher in her 40s  has already been confirmed to infection,

but since he is not her rich contact person, so "infection route unknown"

*Working for elderly facilities in the prefecture

(no other infected person at the facility)

who works in Tokyo [1] person

→"the entertainment district at night" in Chuo-ku, Chiba

*After the outbreak of 7 people,

the examination of the remaining 6 ends

*Tracking infected persons based on the list of store users

→Employees [2] persons in their 10s living in Funabashi

*Cumulative related to US military = 229 people

*It is not counted as the number of infected people in Okinawa Prefecture.

→Outbreak is occurring at two restaurants in Hamamatsu City...

In prefectures other than the above, many prefectures, including Fukuoka, Hyogo and Okayama etc. have new infections of 10 or more.

(*5 out of 10 people in Okayama are said to be a "the entertainment district at night" outbreak.)

Today is the third consecutive holiday in Japan.

Since the first day of consecutive holidays, the news about each tourist destination related to the "Go To Campaign" has almost disappeared from the news, but what about after that?

In Tokyo, where I live, there seemed to be few people on the train, probably because one of the reason was raining today.

Well... Tokyo is excluded from the "Go To Campaign"...

The story has changed at all,

but yesterday I was a little tired and I was sick, and I rounded up early after a long time and tried to sleep as much as possible.

If we are sick recentely, we cannot stop thinking about it, right?!

When I woke up, I had no trouble with my taste and the sign of cumulative fatigue appeared elsewhere, so I was relieved that it was not COVID-19. lol

The breakfast was delicious as usual. (Lol)

There is some good news.

It's Saturday today, so the total number of infected people for one week in the

"Calendar of the changes in New Coronavirus Infection in Tokyo"

It was increasing 1.5 times or 2 times each week, so I was prepared for 3000 people this week, but it have managed to keep increasing slightly.

However, it's only increasing, so I'd like it to change in the direction of decreasing. ..