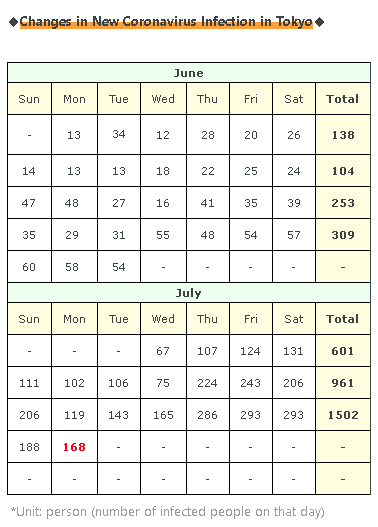 168 (-20 from the day before) new infections confirmed in Tokyo.

The number of new infections in Tokyo has been in the 100 range for the second consecutive day, and has decreased by 20 from yesterday.

However, it is clear when you look at the

but since July 2 it have been several time repeating that "the number of newly infected person is small for a few days before the big increase".

I didn't feel happy with the fact that "Tomorrow may increase dramatically."...

→ Men and women in the Philippines [9] people

And today, not only the prefectures near Tokyo but also Osaka, etc., the number of new infections was significantly smaller than the previous day.

Maybe it's a Monday when the number of new infections is low and it's easy to come out, or maybe it's been an unusually high number for the past few days.

But as a result, it was good today because there were few in Japan.

I hope that the number of infected people will remain low tomorrow. ..

→A male in his 80's who died today was admitted to a medical institution for the treatment of chronic illness, but was found to have COVID-19 infection

→ He was transferred to another medical institution and suddenly changed his condition during treatment.

→The same junior high school as the older sister

of a boy with confirmed infection [1] person

*Classmates of rich contacts will be inspected

→Female in her 40s working in Tokyo

*Female employees in their 20s in Hiratsuka City

*She also served customers, but she wore a mask during work

and did not work after symptoms appeared.

→Military personnel of the US Navy

Yokosuka base in Japan

*The person moved without waiting for the PCR test results at Haneda Airport,

before the results are available.

(Hotel for quarantine of US military personnel coming to Japan)

(* Originally it is necessary to stay in Haneda)

*Part-time job at a restaurant in Tokyo

*She attends a vocational school in Tokyo.

*There are many people that 1st time of test was negative,

but the other day,

2nd time of test was positive when they had a fever and tested.

→It was aslo this pattern today...

*Male patients in their 70s and 20 surrogate therapist women

In prefectures other than the above, many prefectures, including Aichi and Kyoto etc. have new infections of 10 or more.

However, in many prefectures such as Osaka (89 the day before → 49 today),

the number of infected people has decreased to about half today, so I hope that it will continue to decrease if possible.

It's really like roller coasters these days when reading the number of infected people.

Even though it has calmed down yesterday and today,

the number of new infections in Tokyo has been steadily increasing since July, but...

Mr. Tatsuhiko Kodama, an emeritus professor at the Research Center for Advanced Science and Technology at the University of Tokyo, also mentioned in the Diet's answer,

If we do not take measures now, there is a possibility that the number of new infections in Tokyo will be 500 instead of 300 in a week, so I would like the government and Tokyo to take measures immediately...

And the start of "Go To (Travel) Campaign" is coming soon tomorrow.

According to today's "Go To (Travel) Campaign" news,

the government will pay the cancellation fee for trips booked between

to July 16 (Tokyo is excluded)

It is said that it is proceeding with.

I wonder if it's okay to start this day after tomorrow (it's already morning so tomorrow!)  because the discussion is still changing...

The increase of the number of infected people is calm today, but the situation is such that we should really postpone it...

Japanese politics, COVID-19 measures and economic measures are cluttered in this way and are not smart now.

Up to this point, there were only dark topics, so from here one bright topic...！

Will it be exceeded tomorrow? ..

The number of new infections in Tokyo has dropped significantly since yesterday and today.

There were small number of infected people in Japan today!

I hope this will continue tomorrow...