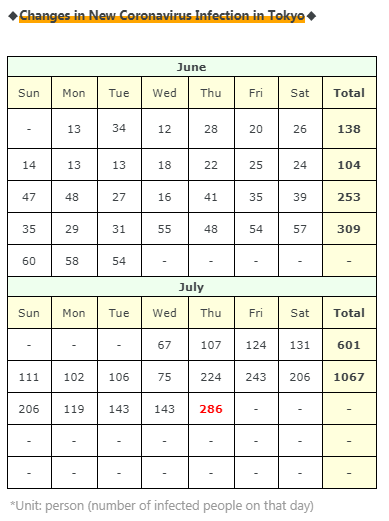 The number of new infections in Tokyo has been increasing over the past few days and I felt something uncomfortable,

but after all the number of infections has increased dramatically...

And today, the number of new infections seems to have been quite high nationwide.

・Nursery teacher at a municipal nursery school in Hachioji [1] person

→ Men and women in the Philippines [4] people

And today, there were so many prefectures that updated the number of records after lifted the emergency declaration or the highest number ever, so I would like to summarize not only the neighborhoods of Tokyo but also the prefectures with a large number of infected people.

(*Free PCR test for entertainment district at night in Omiya)

→For all "cabaret" and "host club" employees

operating in the Minami Ginza area of ​​Omiya Ward

→ It is said that there are about 100 stores (the number of employees is unknown) in the same area, but the actual application is limited to 13 stores and 118 people.

*Spectators (men and women in their 20s, housewives in their 40s, etc.)

*All of these schools are temporarily closed after 16th

It is not listed because the details are not known, but in addition to the above, infections of 10 or more people have also been confirmed in Fukuoka prefecture, Kyoto prefecture, Miyagi prefecture, Hyogo prefecture, etc.

It feels strange that it increased all over the country all at once on the same day and became the highest ever in each place.

I haven't been able to put it together lately today, so I have only two news items that I was interested in today.

First one is here that,

"Go To Travel Campaign" will be held as scheduled, said Japan Tourism Agency Secretary Hiroshi Tabata, who emphasized in a press conference.

When the infection spreads in the business, "I do not have a measures at the moment" as to whether it is supposed to stop acceptance by each local government...

They are not thinking..

(If it is exactly as announced)
It seems that there will be more than 4000 people tomorrow. ..

Still today, there are people who have died.

We must keep in mind that it is a horrifying virus that has no vaccine yet.