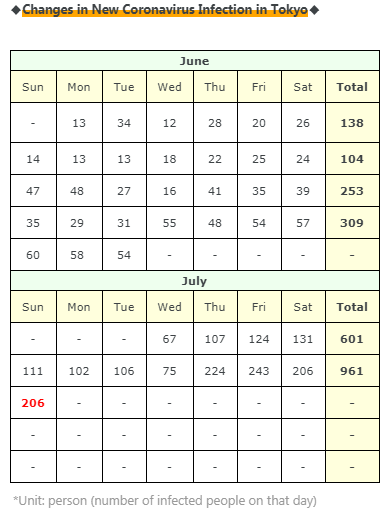 206 (+-0 from the day before) new infections confirmed in Tokyo.

The number of new infections in Tokyo has lightly exceeded 200 today for the fourth consecutive day.

And it's the same as yesterday.

Just a few days ago,

There is a trauma (?) that suddenly increased,

so I think that "I'm glad it didn't increase dramatically" somewhere.

It’s still too high, though...

I hope it starts to decrease tomorrow.

→A man in his thirties in Tokyo

who Own a house in Karuizawa City, Nagano Prefecture

*Infected people in Nagano prefecture have been in their 20th day since 18th.

→A man in his thirties in Tokyo

who is staying in Nagano Prefecture.

*Only 4 people have been infected in Tottori prefecture so far...

Well, I posted it at the bottom of this blog,

is another week starting from today.

The week before yesterday,

the number of new infections in Tokyo was [961] in a week.

I just pray that this week will not be exceeded...

→ Nosocomial and school infections are likely to occur.

→Acquaintance of guest of host club that have outbreaks [3]

→ The school will be temporarily closed on the 13th,

and they plan to carry out a group inspection

of concentrated contacts from tomorrow.

→ Male employee in thirties at

"the entertainment district at night" in Tokyo [1] person

→ Of the 22 people other than the above-mentioned nosocomial infections,      only 16 people had traffic to and from Tokyo.

For the time being...

"Men in their 30s infected in Nagano Prefecture"...

Since I live in Tokyo, let me just say one word...

"He must not disturb other prefectures..."

As a citizen of the same city, I'm really sorry...

I said yesterday that It seems like it's a bad stage if they don't take measures, rather, they had to take some measures before few days ago",

regarding to that, today, Mr. Yasutoshi Nishimura, Minister of Economic Rehabilitation, at a press conference on the 12th, said that the number of people infected with COVID-19 is increasing in four prefectures of Tokyo, Kanagawa, Saitama, and Chiba.

This is a YahooNews article, but most of the comments in this article are "They should request it now, not review it."

And do they do it for all 4 prefectures?

I wonder why they wouldn't have taken any measures until now.

I don't understand it.

I've been saying this for a while...

After all, if the the emergency declaration is issued again, the "entertainment district at night" of ​​Tokyo that the government wanted to protect will not be protected after all...

I wrote it yesterday,

but Tokyo and the government are

■They are trying to enhance the medical care provision system.

However, it is the state that

■almost no measures have been taken to prevent the spread of infection...

First of all, don't you think that measures should be taken in the "entertainment district" and "20s to 30s"?

I think that those who experience the feeling of despair and inconvenience at the time of a declaration of an emergency are more irritated about this situation...

It's also what I'm writing these days,

as "What I feel when I live in Tokyo",

Indeed, in Tokyo, which is one of the regions where the emergency declaration was the longest,

it seems that there were places that did not comply with the business suspension request, such as some place in "the entertainment district at night",

① Obediently leave according to that request

③ In the worst case, the company or shop goes bankrupt

They occurred in the most of places.

There were some office workers and some people who lost their jobs,

and many of the temporary employees had quit their jobs.

There are many people who work part-time, such as students, who lose their income due to reduced attendance.

And most of the companies and shops in Tokyo are still coordinating attendance, so there are really many people who are still unable to work and their income has dropped sharply.

Still, the Tokyo Metropolitan Government and the government have not taken much measures to "reduce the number of infected people",

and there are still many people who are still hung out with their friends around in the city centered around young people...

So I really want the number of infected people to decrease and converge.

No matter what, the number of people reached 3000 at a stretch.

Now, the news that can't be positive easily continues.

Since the "easing of events" was held on July 10th as scheduled, events such as the J League have started to attract spectators.

it's frustrating that it seems that they are only prioritizing "what they originally wanted to do" over "COVID-19 countermeasures."

Both of these are originally fun events that completely blow away the fatigue of COVID-19...

It's also a long-awaited opportunity for people in the industries involved...

I want someone to replace all the Taiwanese governments and Japanese politicians! lul

Joking aside, you and your loved ones don't get infected and have a hard time,