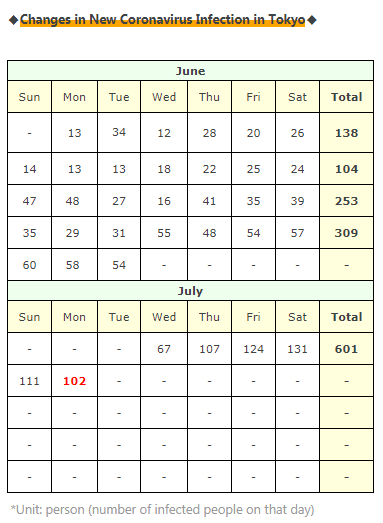 102 (-9 from the day before) new infections confirmed in Tokyo.

The number of new infections in Tokyo has been over 100 for five consecutive days,

but today it has decreased for the second consecutive day!!

I hope it will be double-digit tomorrow...

…Actually, I was hoping for a single digit a month ago, but before I knew it, my hope had become extremely low...

but details are closed today.

→There seems to be no outbreaks,

→most of them are in their 20s

→There are some person who work in Tokyo (commuter)

As far as Tokyo is concerned, today there are still many

“the entertainment district at night”...

However, it seems that we cannot expect the usual way of thinking about administrative measures.

I live in Tokyo and work in Tokyo, but there are a few things I feel living in everyday.

①People who have childrens are very careful with COVID-19.

②Singles in their 20s and 30s are still going out for drinks.

④Of course, there are some single people who are careful, but unfortunately the number is relatively small.

⑤Of course, there are a certain number of people who are married or have children and want to play.

⑥But most people have proper masks.

Even if I look at Shibuya or Shinjuku at night, it is quite crowded,

and it is quite difficult to appeal to the people who are going out even if the number of new infections exceeds 100 every day...

That is an honest impression. ..

(* It is the atmosphere I feel)

How many of the [42] people in today's infection route are related to "the entertainment district at night" or infected through it?

It seems that there will be more than 2000 people tomorrow.

Everyone may say, "I know, I already know that" However, as you can see from Tokyo and its neighborhood, the infection spreads more and more by moving by train.