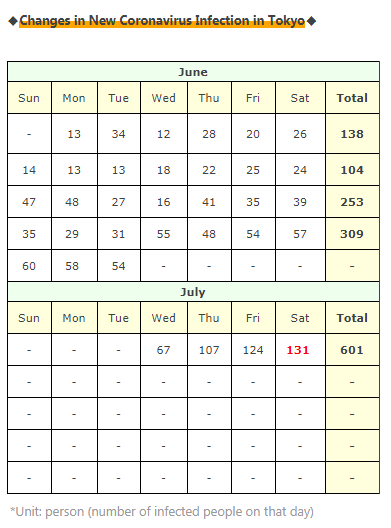 131 (+7 from the day before) new infections confirmed in Tokyo.

The number of new infections in Tokyo has been more than 100 for three consecutive days...

If you do not look at the details of the number of infected people, it will be confusing because there are too many.

So, first of all, I will summarize

→*There are also cases where parents were infected at a drinking party and passed on to their children.

・Infection in hospitals and facilities [7] people

Filipino men and women in their teens to 50s

There are so many specific infection routes today...

Even if I look at it from an amateur's point of view,

it is a number that I think is really bad unless they take measures immediately...

However, today's government's way of thinking about measures is unfortunately not as expected.

I tried to summarize the contents a little. ↓

but today the number of infected people in the prefectures near Tokyo and the whole country has increased dramatically,

so I will summarize the details of some prefectures.

There is no information such as mass infection.

(almost them are cluster)

Today's news is confusing due to the heavy natural disaster,

and the information of COVID-19  is updated slowly.

I will update the details if I know it later today.

(Administration and experts deny it, but)

It seems that the infection around Kanto region (especially Tokyo) is spreading.

It is said that many infected people in each prefecture of the Kanto region have a history of living in Tokyo, and there are many people who come and go every day due to their workplaces in Tokyo.

So please be really careful on the train...

How many of the [46] people in today's infection route are related to "the entertainment district at night" or infected through it?

What do Tokyo and the government actually think?

Most of the new infections that are currently occurring seem to be “mild” or “subclinical”.

I think they may not be able tosay it publicly because they may be criticized,

but I wonder if they want to infect people and acquire immunity as much as possible, even if serious cases do not occur...?

Well, it seems epidemiologically correct, and actually the number of severely ill patients is now 33 people, and it does not increase at all but rather decreases.

Even so, ordinary people like me are really worried, so I would like them to explain it a little more carefully...

Let's get through this difficult time together!