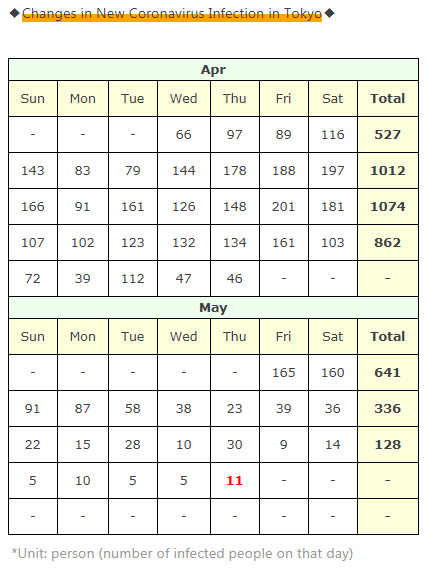 11 (+6 from the day before) new infections confirmed in Tokyo.

The number of new infections in Tokyo was 11 today!

in Tokyo on the 21th today, there were 9 people with unknown infection routes,

so the total number of new infections is small, but it is a bit uneasy...

It's so prevalent in the city that I don't know the route...

I really hope it will converge as it is...

When canceling an emergency declaration, I would like them to take some measures against this problem before canceling it.

In addition, the estimate of how many people are actually receiving medical treatment today ...

It seems that the number of people who are undergoing medical treatment nationwide will soon drop to 3,000!

Seems to be cut tomorrow!

Especially what happened to Kanagawa?

The infection is spreading. ..

In Tokyo, today there are 9 people who have unknown infection routes,

It's a bit suspicious in Kanto ...

By the way, in Tokyo

"Of the people who do not know the route of infection, 3 men are engaged in food and hospitality business and suspected community-acquired infection"

is what they said….

Everyone has been doing their best so far

Please be really careful when you go out.